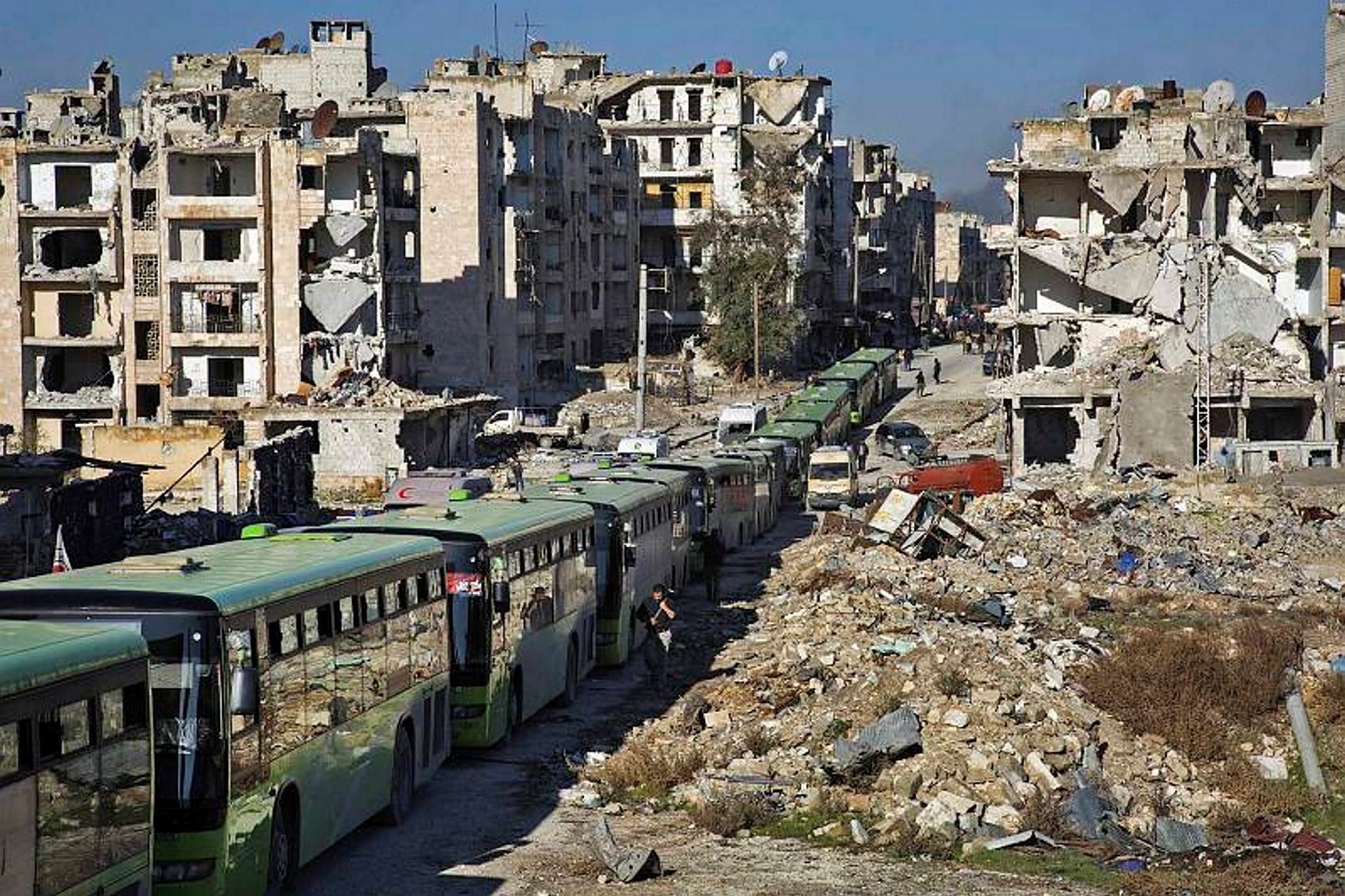 Buses are seen during an evacuation operation of opposition fighters and their families from opposition-held neighbourhoods in the embattled city of Aleppo, Dec. 15
by Yusuf Selman İnanç Dec 19, 2016 12:00 am

The Turkish-brokered truce, based on an accord with Russia, keeping Iran out, to evacuate civilians from besieged Aleppo, has made Iran belligerent

Not long ago, opposition fighters felt close to victory in Aleppo after pushing the regime to the south in a bid to seize the whole city. However, Russia's aerial and Iran's ground support and alleged disputes amongst the opposition groups have changed the game. Turkey has staunchly opposed the regime since the peaceful revolution turned into a bloody civil war after the regime started brutally attacking unarmed people starting in the middle of 2011.

The government asserted its support for the opposition, calling on Bashar Assad to step down and start free and fair elections. The war has troubled Turkey due to the emergence of Daesh, which has carried out several deadly attacks in Turkey, and the rise of the PKK's official Syrian branch, the Democratic Union Party (PYD), which has taken power near the Turkish border, creating a Kurdish corridor. The U.S.'s and the EU's indecisive approach to the war in Syria and fishy stance toward Turkey, including explicit support for the PYD and also the U.S.'s rapprochement with Iran after the nuke deal, have paved the way for Tehran and Moscow to pursue their ambitions in Syria.

After the regime declared it has seized much of the opposition-held Aleppo enclave, Turkey launched an intensive diplomatic effort to save civilians from the brutality of regime troops, Iranian soldiers and Iran-backed Shiite militias, which have committed atrocities against Sunni civilians in Iraqi towns, freed from Daesh. Although the war did not start with a sectarian desire, Iran and the regime have used sectarianism as a tool to mobilize the masses loyal to them and convince the Western media, which couldn't understand the dynamics of the war and believed that the opposition was fighting against the regime just because of sectarian differences, as if there was no oppression, arbitrary detention or unidentified murders.

There was not much left for Turkey to do to help the opposition maintain its struggle against the brutal regime in Aleppo. Therefore, Turkey tried to reach an accord with Russia to evacuate civilians. But Iran's proxy groups violated the accord for two possible reasons: First, Iran was not a part of the accord as Turkey and Russia were in direct contact. Second, Iran attempted to prove it was capable of acting alone in Syria, as it has applied expansionist policies in other parts of the region and made proposals on some issues that concerned Iran more than other parties. And Iran does not want to look like it is acting under Russia's periphery as Tehran aims to improve relations with the EU, following the nuke deal.

Aware of the ruthlessness of the militias, Turkey asked Russia to stop the air attacks and prevent the regime and Iran-backed militias from carrying out mass executions. As a result of several face-to-face meetings and telephone calls, the two sides agreed to evacuate civilians to Idlib and accommodate them in a tent camp later. Apparently, Iran was not involved in the talks and was treated as a warring group rather than a regional actor, which infuriated Iran. Therefore, Iran ordered its militias to attack convoys evacuating civilians and asked that trapped Shiite militias in Kefarya and Fuah be evacuated.

In addition, Iran's spoilsport attitude was an attempt to show it was not under Russia's control and could act despite Russia. Iran made a similar attempt to break Russia's alleged hegemonic stance when its assembly refused to allow Russia to use an Iranian airbase. Iran had no intention to enter Russia's periphery, especially after signing the nuke deal with the U.S., resulting in the removal of sanctions.

Moreover, to boost economic relations with the EU, which is quite worried about Russia's expansionist desire towards the Baltic states after annexing Crimea and occupying Ukraine's east, Iran has been struggling to preserve its independence and ability to act alone.

Iran also wants Russia to realize that Tehran has been in Syria since the war broke out, spent billions of dollars and lost hundreds of men. And, Iran's military actions and use of proxies are not limited to Syria. A so-called Shiite Crescent from Iran up to Yemen through the tiny Arab countries, accommodating a considerable Shiite minority, is allegedly on Tehran's agenda, and it does not want it to be disrupted by any regional or international actor, such as Turkey or Russia.

Russia, seemingly, did not know that Iran-backed militias were going to attempt to block the evacuation, according to an Aleppo civilian who explained the prevention of the evacuation on his Facebook account. Abdulkafi Alhamdo wrote: "After the buses, carrying wounded civilians, passed the Russian checkpoint, surprisingly there was a Hezbollah checkpoint where the bus waited for 15 minutes. Later, tanks and militias surrounded the buses. They started firing on Red Crescent cars, then took all the men off and seized all personal belongings, including cell phones. One of the opposition fighters attempted to resist the militias to protect his pregnant wife, and he was immediately killed. After a short exchange of fire, five people were killed. They wounded the pregnant woman and took her away, while she was bleeding. The militias detained some people, killed one of them and made buses return." Although it is impossible to confirm the authenticity of the claims, several other people from Aleppo shared similar messages. The post is important to show the militias' brutality and that Russians allowed the buses to go but Iran-backed Hezbollah stopped them. In another video, posted on twitter by a group of men, claiming to be in Aleppo, said Iran's militias have been targeting civilians deliberately and not allowing the buses to leave Aleppo. At the end of the video, the speaker said if Iran is not stopped a slaughter would not be avoidable.

In an exclusive interview with Middle East Eye, Vitaly Naumkin, one of the special advisors to the U.N. Special Envoy to Syria head Staffan de Mistura, said Russia has been pushing Assad for a political solution, as Moscow believes military operations will not put an ultimate end to the war. If true, Iran might be on the opposite side, as a political solution will pave the way for Turkish-backed opposition members to join a coalition. Moreover, Russian President Vladimir Putin said Turkey and Russia have agreed on maintaining peace talks in Astana, Kazakhstan. Iran's aggression stems from its desire to keep other regional actors out of the game in Syria.
RELATED TOPICS