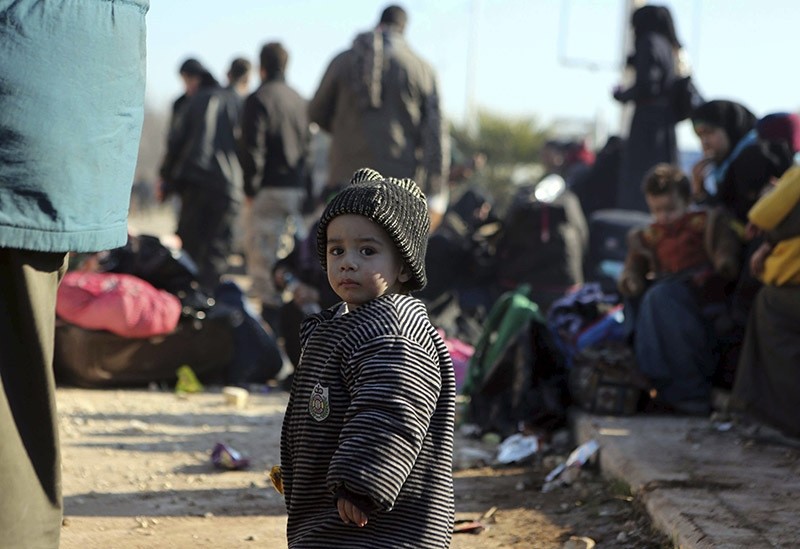 A young Syrian child evacuated from the embattled Syrian city of Aleppo during the ceasefire arrives at a refugee camp in Rashidin, near Idlib, Syria, early Monday, Dec. 19, 2016. (AP Photo)
by Daily Sabah Dec 20, 2016 12:00 am

Çavuşoğlu also said that evacuations are scheduled to be completed by tomorrow.

37500 people have been evacuated from #Aleppo so far. The goal is to complete all evacuations until tomorrow.

The International Committee of the Red Cross is also supervising the evacuation process.

The committee reported that 15,000 people had been evacuated on Monday, also noting that thousands more are still waiting to leave the eastern Aleppo enclave besieged by Assad regime forces and their allied Iran-backed foreign militias.

Yesterday morning, the evacuation of two pro-Assad villages besieged by Syrian opposition forces in the Idlib provice, Fuaa and Kafraya, also began within the framework of the agreement reached between both parties.

Last week, Turkey and Russia brokered an evacuation plan for the besieged tens of thousands of civilians on the brink of being massacred by the Assad Regime and its allied forces.

The cease-fire and the evacuation deals had been breached several times by Iran-backed militiamen over the past days who also massacred civilians in several occasions, before being finally implemented as a result of Turkey's determined efforts and continuous negotiations with Russia.

Opposition-held parts of Aleppo had been besieged by the Assad regime since late August, causing great destruction in the city.

The besieged eastern Aleppo enclave was finally overrun by Assad forces last week, cornering opposition fighters and the civilian population within a small pocket of a few neighborhoods.