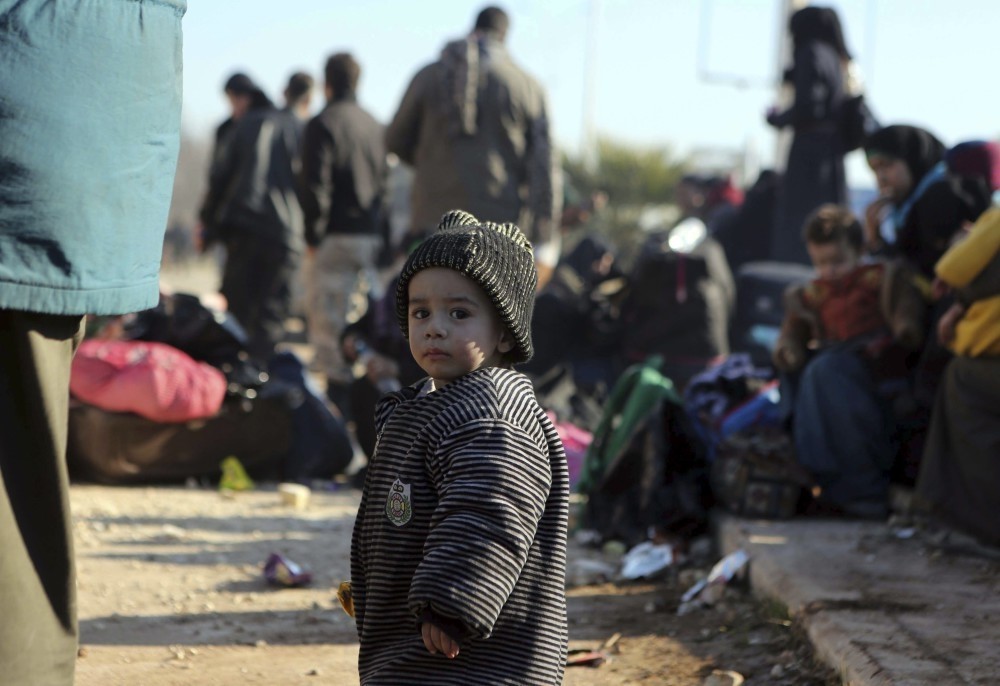 A young Syrian child evacuated from the embattled Syrian city of Aleppo during the ceasefire arrives at a refugee camp in Rashidin, near Idlib, Syria.
by Yusuf Selman İnanç Dec 21, 2016 12:00 am

After the evacuation of the moderate Syrian opposition from Aleppo due to the world's largely reckless policy to placate the Assad regime and its Shiite militias, Daesh can now propagate its claim to be the sole effective group that protects the Sunnis

As of last week, the battle for Aleppo ended, leaving in its wake massacres and displacements. While the regime-controlled enclaves of Aleppo were ablaze with pro-regime celebrations and the opposition-held part of the city was in deep misery, Daesh is on its way to becoming the main beneficiary of the situation. The brutal group has enjoyed filling the vacuums the regime has left behind and the Iran-backed Shiite militias were deployed in Aleppo for the said purpose of dealing the last blow to the moderate opposition groups. Daesh, which has been retreating for a while after Turkey launched Operation Euphrates Shield in a bid to clear its border from Daesh and the PKK's official Syrian branch the Democratic Union Party (PYD), made a significant advance against the regime, taking the symbolically significant ancient city of Palmyra back. It was like a gift for the group as it was its first major gain in the last six months.

The group was driven out of the city last May after Russia launched intense aerial strikes and the regime declared its victory, promising to repair the damaged ancient buildings and even organized a concert in the amphitheater. Barely six months later, Russia ordered the regime to send all its manpower to Aleppo, leaving Palmyra defenseless. Russia, in fact, has never had any intention of fighting Daesh but focused on crushing the moderate opposition groups for restoring Bashar Assad's power and preserving its military presence in the Mediterranean Sea. The U.S.-led international coalition, set up with the aim of erasing Daesh from both Syria and Iraq, has not been successful so far and has been accused of insufficient action against the group.

An allegation accused Iran-backed militias of receiving bribes from Daesh not to resist. Quoting pro-regime sources, the Daily Beast reported on Dec. 10 that "A pro-regime source told The Daily Beast that the oil and gas fields were defended by the National Defense Force, a pro-Assad militia built and trained by Iran. 'The NDF had over 800 men posted around the strategic Shaar gas field and the other areas, in addition to around 250 regular soldiers,' the source said. 'They had maintained defensive positions for the last six months. In August, operations had been stopped. When Daesh attacked days ago they retreated and left most of the heavy weapons without a fight. In the panic, over 100 were killed or are still missing. Word is that a senior NDF commander who was stationed around Shaar was bribed by Daesh. It is not the first time this has happened. A decision was made to prevent the city falling at all costs'." What was worse than abandoning the city was leaving heavy artillery weapons in the hands of Daesh. Syrian expert Hassan Hassan, quoting Daesh's Amaq News Agency on Twitter claimed that Daesh seized 44 tanks, 28 military vehicles and hundreds of guns and ammunition. Daesh also broadcasted a video showing the captured weapons.

Secondly, the fall of Aleppo into the hands of Iran-backed Shiite militias who are infamous for their atrocities against Sunni civilians have fueled Daesh's sectarian approach as well since the group claimed that the moderate opposition groups, which are also infidels in Daesh's eyes, failed to repel the Shiites' assaults. In several articles, Daesh has made calls to the Syrians to side with the group against the Shiites, decorating the rhetoric with videos that show the militias' brutality. Daesh has been using sectarian hatred to mobilize people. "The group is adept at cultivating and exploiting preexisting sectarian fissures in the Middle East. Daesh taps into communal hatred and religious concepts to recruit and justify its acts, or to foster sympathy and neutralize forces that actively reject it. It has proven particularly powerful in outbidding al-Qaeda for recruits," a June-dated Carnegie report says when describing the group's actions.

While Iranian leaders were hailing the fall of Aleppo, claiming that the "sectarian terrorists" were cleared, Daesh, listed as a terrorist organization by hundreds of countries, including Turkey, the U.S., the European Union and Russia, was making advances.
RELATED TOPICS