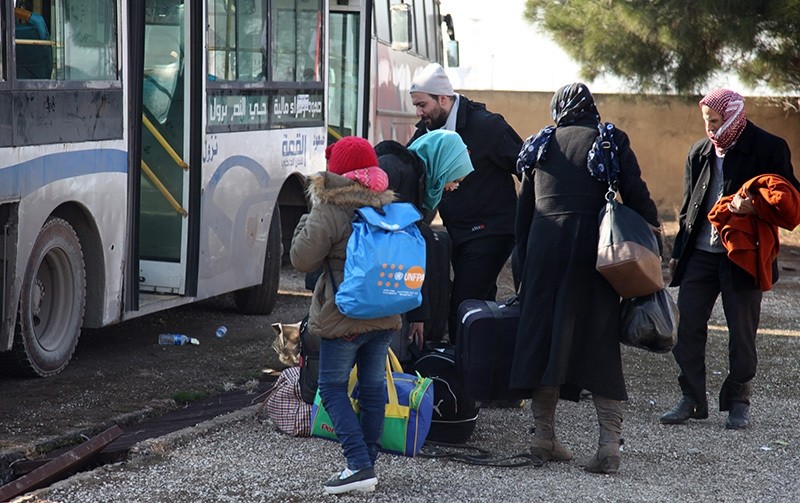 Syrians who were evacuated from Kafarya and Fuah villages of Idlib province arrive at a temporary housing center in Jebrin, Aleppo countryside, Syria (EPA Photo)
by Associated Press Dec 21, 2016 12:00 am

Syrian opposition forces said they have reached an agreement with the Assad regime in Damascus on Wednesday to complete their withdrawal from Aleppo, the country's largest city.

"An agreement has been reached to resume the evacuation of Aleppo," announced Ahmad Qara Ali, spokesman for the Ahrar al-Sham faction. He said the evacuations would begin "shortly."

The Syrian opposition agreed to surrender their last foothold in the city, last week, marking the most significant victory for Assad regime since an uprising against his family's four-decade dictatorship swept the country in 2011.

It followed a punishing offensive by the regime and its regional allies that drove out tens of thousands of civilians from the east of the city. It had been held since 2012 by the opposition.

The regime agreed to allow the remaining residents — fighters and civilians — to leave as part of the agreement brokered by Russia and Turkey in Ankara last week.

But a dispute delayed the final round of evacuations for over 24 hours after some 20,000 civilians and fighters were bused out of the city.

Some 3,000 opposition fighters and civilians stood outside in harsh wintry conditions overnight, waiting to board what may be the last convoy out of the east. Activists circulated photos on social media of families huddled around fires amid the sleet and snow. By midday, temperatures in the city hovered around freezing.

The Britain-based Syrian Observatory for Human Rights, which monitors the conflict through a network of activists on the ground, said 60 buses were waiting to leave.

The opposition and the regime traded blame for the delay.

The opposition are supposed to allow the evacuation of the sick and wounded from the two villages as part of a cease-fire deal reached last week to ensure the evacuation of eastern, rebel-held part of the city of Aleppo.

Ward Furati, spokesman for Aleppo's Fastaqim faction, said fighters in Aleppo "won't leave until the security of all the civilians has been fully guaranteed."

Opposition media activist Ahmad Primo said the regime's side was demanding to complete the evacuations from Foua and Kfarya before it would allow buses out of Aleppo.

The International Committee of the Red Cross said it was prepared to facilitate the evacuations when they resume.

Spokeswoman Ingy Sedky said the ICRC had already evacuated 750 people from the twin villages. This would leave some 1,500 more requiring evacuation, according to the deal reached by rebels and the government Monday.

On Tuesday, the ICRC said it has evacuated 25,000 people from the city since operations began last week, but the Observatory says the tally is closer to 17,000.

The Observatory also said 21 buses are still waiting to evacuate the sick and wounded from the opposition-besieged Shiite villages of Foua and Kfarya.

Also Tuesday, the U.N. humanitarian aid agency said the regime authorized U.N. plans to send about 20 staffers to monitor evacuations from eastern Aleppo. It was not immediately clear if the U.N. monitors would arrive on Tuesday.