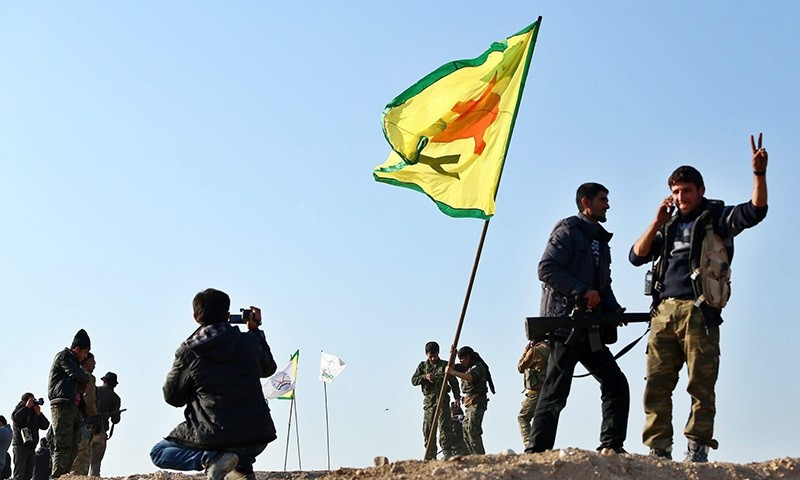 As the Assad regime gains the upper hand in the five-year-long civil war in Syria with the Russian intervention in September 2015, culminating in the recent defeat of the opposition in Aleppo, they now want the PKK-linked Kurdish militia to give up control of areas bordering Turkey.

"The government had entrusted the PYD with these areas and now the government wants them back. Their [PYD's] work in confronting the terrorists has been completed," General Haitham Hassoun of the regime army told the Kurdistan Regional Government (KRG) based Rudaw news agency, although he refrained from giving an exact time frame.

Regime forces had withdrawn from Syria's predominantly-Kurdish northeastern parts in 2011, leaving control to the PYD, the Syrian wing of PKK terrorist organization, while its armed forces inherited a large cache of weapons, ammunition and facilities that were left behind by regime forces.

Hassoun claimed that he personally followed up the military aid sent by the regime to YPG, the armed wing of the PYD.

Despite clashes between the regime forces and YPG for limited periods in 2012 and 2016, the two parties largely avoided confronting each other. Previous reports suggested that some regime institutions continue to operate in PYD-controlled areas, whereas regime forces continue to control enclaves in Hasakah and Qamishli, the largest cities in Syria's northeast.

This uneasy alliance was primarily due to the fact that the regime needed its troops elsewhere in the country. In addition, the PKK had long been an enemy of its northern neighbor Turkey, which is among the active supporters of opposition against Assad's rule.

Earlier in March, the PYD declared autonomy in three "cantons" in northern Syria, namely Afrin in the west, Kobani in the center and Jazira in the east, while these three regions were brought together under an entity titled "Federation of Northern Syria-Rojava." Kobani and Jazira cantons were linked in 2015 after Daesh's defeat in Kobani and subsequent retreat from the predominantly-Arabic town of Tal Abyad, amid protests from Turkey and international rights groups of ethnic cleansing against local Arabs and Turkmens.

A possible move to link Kobani with Afrin - which would give the control in Turkey's nearly entire border with Syria to a hostile force - was stalled by Turkey as it launched Operation Euphrates Shield with Free Syrian Army (FSA) elements on Aug. 24, following the capture of the town of Manbij by YPG-dominated Syrian Democratic Forces (SDF) in mid-August. Turkey has repeatedly warned the SDF to not to cross to the west of Euphrates, and targeted SDF when it moved further into the territory evacuated by Daesh after Turkish-led advance.

Rudaw previously reported that the regime wants PYD to return the control of Aleppo's Sheikh Maqsoud neighborhood and its surrounding area to regime forces and institutions by the end of 2016, citing Ali Maqsud, a military analyst close to the regime. Maqsud also denounced PYD's autonomy plans in northern Syria.

Although the regime's demand was a largely predicted outcome in Syrian civil war, Hassoun's statement also pointed to the growing cooperation between the PYD and the U.S.

"Ever since the PYD became a US servant and is being used to protect American interests, the government realized the unfaithfulness of the PYD, which is trying to undermine the government and increase its dominance at our cost," Hassoun said.

The Assad regime – backed by Russia and Iran – is not the only party that is disturbed by the PYD-US cooperation. Turkey, a NATO ally of the U.S, considers the PYD as interchangeable with the PKK, which has been resuming an armed insurgency against the Turkish state since 1984 and designated as a terrorist group by the U.S. Instead of arming the YPG, Turkey proposed establishing local forces with clear distinction from terrorist groups, an idea that couldn't have been materialized so far.

Amid a reconciliation period with the PKK between 2012 and 2015, Turkish government sought to establish links with the PYD. However, these efforts proved unfruitful as the PKK, with increased weapons, manpower and legitimacy, relaunched its armed insurgency against the Turkish state in the summer of 2015. Weapons provided by the West to the PYD were often used in attacks against Turkish security forces, while militants trained in Syria targeted Turkish civilians in suicide attacks.

Despite the Baathist regime's repression of Kurds - some 10 percent of Syria's 30 million population - which included stripping them of their citizenship in early 1960's, the Assad regime had been one of the leading supporters of the PKK, providing the terrorist group with bases and training centers while its leadership were provided with safe havens. This support ended in 1998, when Turkey threatened Syria with invasion if it continues to support the PKK, and its leader Abdullah Öcalan had to flee Damascus, only to be captured by Turkish agents a few months later.

After that period, the Assad regime returned to its original policy of repressing the Kurds, and the PYD, who were underground at the time, was the only organized force among Syria's Kurds when the civil war exploded in 2011. With the help of PKK's already established armed force, the PYD eliminated its potential political rivals among Kurds and became the sole authority in regions it controlled.

When the regime was on the brink of collapse after opposition's advance in Damascus and Aleppo provinces, it sought to cooperate with an old ally.