Cease-fire to take effect any time, Assad not in political transition 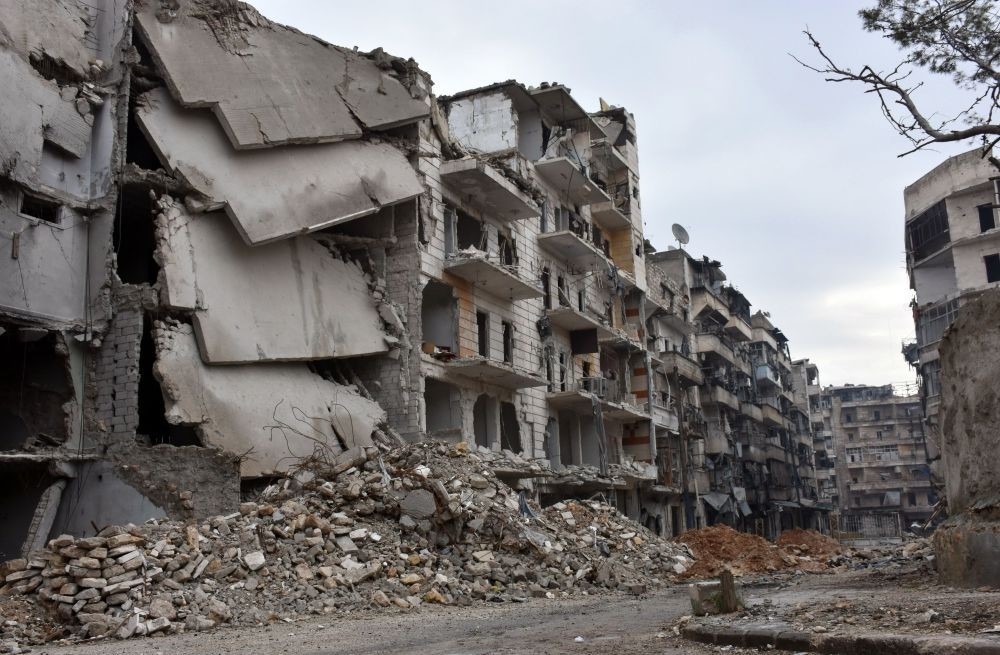 A picture shows the destruction of buildings in the former opposition-held Sukkari district in the northern parts of Aleppo on Dec. 23.
by Daily Sabah with Reuters
Dec 29, 2016 12:00 am

Foreign Minister Çavuşoğlu hinted at the high possibility of a nationwide cease-fire in Syria that has been brokered by Ankara and the Kremlin. He also asserted that a political transition with Assad will not be possible

A joint plan by Turkey and Russia to establish a nationwide cease-fire in Syria which will exclude terrorist groups such as Daesh, al-Nusra and the PKK's Syrian offshoot the Democratic Union Party (PYD) could go into effect in the very near future, Foreign Minister Mevlüt Çavuşoğlu said yesterday. Speaking to reporters in Ankara Wednesday, Çavuşoğlu said Ankara and the Kremlin have been making joint efforts to ensure a cease-fire across Syria as in Aleppo. Turkey has spent a tremendous effort to ensure a cease-fire deal in the besieged town of Aleppo for the evacuation of hundreds of thousands of civilians. An agreement for the imminent evacuation of civilians and opposition fighters from east Aleppo in Syria was reached on Dec. 13 after mediation efforts from Turkey. Çavuşoğlu said all sides should ensure that the cease-fire not be spoiled. He said that while Turkey uses its influence on the Syrian opposition and Russia on the Assad regime, Iran should urge Shiite groups to respect the cease-fire. The foreign minister expressed that Turkey sees al-Nusra Front as a terrorist group like Daesh, and added that both terrorist groups were listed as terror organizations by Turkey in 2013.

Slamming claims that Turkey tolerates al-Nusra, Çavuşoğlu said he had repeatedly called it a terrorist group. "Our attitude toward al-Nusra is clear. I even came under fire for saying that al-Nusra should leave Aleppo. We told the moderate opposition that they should not keep al-Nusra within themselves," he said.

President Recep Tayyip Erdoğan and Russian President Vladimir Putin have agreed on peace talks to be held between Syrian moderate opposition representatives and the Assad regime in Astana, Kazakhstan. The talks are expected to take place in mid-January.

After Erdoğan and Putin both agreed on the Astana peace talks between the Syrian moderate oppositions and the Assad regime, Turkey, Russia and Iran announced last week that they had reached an agreement on an eight-step "joint declaration" toward finding a solution to the Syrian crisis.

Russia's Lavrov said, "The most efficient and effective format for solving the Syrian crisis is our current trilateral format."

Commenting on some countries' criticism that they are not involved in the solution process, Çavuşoğlu said their cease-fire plans have not been effective so far. "Some big powers ask us why they are not included. We ask them which agreement they could implement," he said.

Can Acun, a researcher of Middle Eastern politics at the Foundation for Political, Economic and Social Research (SETA), said he is skeptical about the cease-fire agreement. Stressing that there are multiple actors in Syria and the situation on the ground is very complex, Acun said outside parties could endanger the cease-fire process.

NO TRANSITION WITH ASSAD

Rebuffing criticism that Ankara made a U-turn with its Syria policy, Çavuşoğlu said Turkey has always been in favor of a political solution rather than a military one. "Turkey has been backing a political solution and cease-fire. Does it mean that Turkey recognizes the Assad regime to support that the moderate opposition negotiates with the regime?" he asked.

Çavuşoğlu asserted that a political solution will be ensured through such dialogues and negotiations.

The foreign minister contended that Ankara "knows that there will not be a political transition with Assad." Stressing that the moderate opposition will not want Assad in power, Çavuşoğlu said the whole world also knows that it will not happen with Assad.

The foreign minister stressed that the PKK's Syrian offshoot the PYD's armed wing the People's Protection Units (YPG) will continue to be targeted in Syria by the Turkish military. However, Çavuşoğlu said there is not a consensus in the United Nations Security Council regarding the YPG's status.

He said the U.S. does not want to recognize the YPG as a terrorist group as it has been trying to benefit from it in its alleged anti-Daesh fight. "It is a fact that the U.S. will not be in favor of including the YPG in the list of terrorist groups while trying to use it against Daesh," he said.

Recalling his phone call with U.S. Secretary of State John Kerry, Çavuşoğlu said: "I was in Russia when Kerry called me. I told him that these terrorists [who carried out terrorist attacks in Turkey] come from PKK camps, to which you give weapons."

Assad to leave post in next election, sources claim

Syria's Bashar Assad will leave his post in the next presidential elections, a source speaking to Reuters claimed.

Assad will remain president for at least a few years under an outline deal between Russia, Turkey and Iran, sources say. The sources added that he will quit in favor of a less polarizing Alawite candidate afterwards.

Iran has yet to be persuaded of that, say the sources. But either way Assad would eventually go, in a face-saving way, with guarantees for him and his family.

Turkey and Russia have recently agreed on a cease-fire deal that will ensure Assad forces and opposition fighters will not fight each other across Syria. The two sides are reportedly making efforts for a political solution in the country.