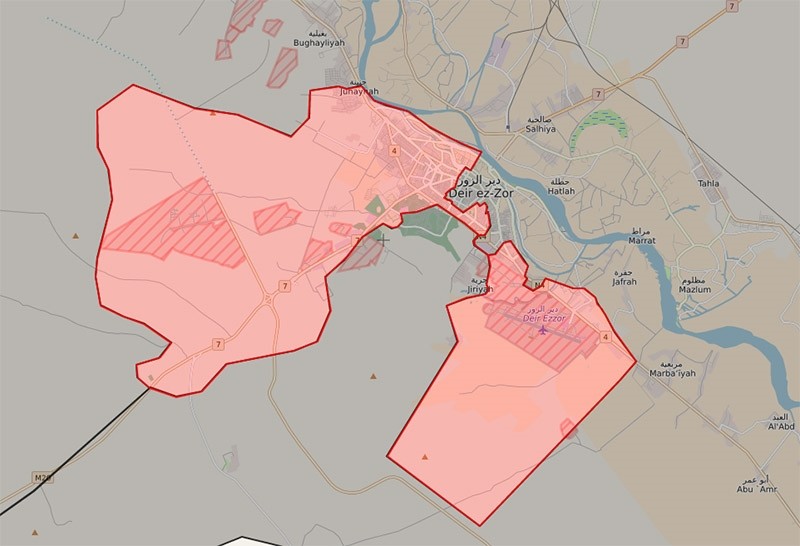 Daesh has launched its fiercest assault against an Assad regime enclave in the eastern Syrian city of Deir al-Zor, reportedly cutting off the regime enclave on Monday night.

The terrorist group seized from Assad forces the districts of Harabesh, Rusafa, Albunasir, Jiraiya, Meisalun, Makabes, Nishan districts, and cut off the road linking the air base controlled by Assad forces with the rest of the enclave, meaning the army is only able to supply the city with air drops.

Heavy fighting has reportedly taken place around the air base and the city center.

On Monday, the Syrian Observatory for Human Rights (SOHR) said the clashes in the city had left at least 82 people dead, including Daesh terrorists, soldiers and militiamen loyal to the Assad regime, and civilians.

The oil-rich city of Deir al-Zor became a target of Daesh terrorists in 2014. The group gradually seized large swathes of the city, cornering Assad forces in an enclave located in the center of Deir al-Zor.

Daesh terrorists are currently holding the whole province of Deir al-Zor, with the exception of pockets in the city center controlled by the Assad regime.

Last month it recaptured the city of Palmyra, 185 km (115 miles) southwest of Deir al-Zor, from Assad forces in an unexpected advance that demonstrated its continuing military threat.