Inviting US, UN representatives to Astana would be right, Russian FM 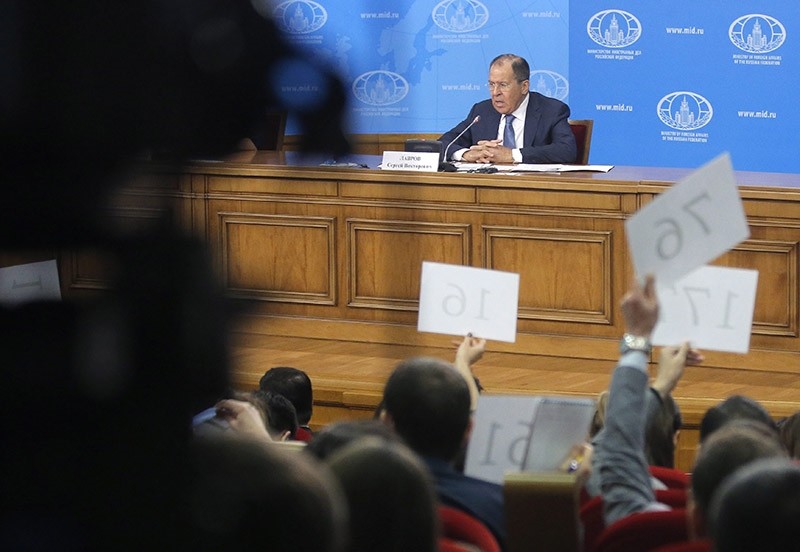 Russian Foreign Minister Sergei Lavrov speaks during his news conference in Moscow, Russia on Jan. 17, 2017. Lavrov gave his annual press conference where he talked about the Russian diplomacy and foreign policy in 2016. (EPA Photo)
by daily sabah
Jan 17, 2017 12:00 am

Russian Foreign Minister Sergey Lavrov said Tuesday it would be right to invite the representatives of the U.S. and the U.N. to the Astana talks, where the Syrian crisis is due to be discussed from Jan. 23.

Lavrov said that the preparations for the Astana meeting are ongoing, and it would be the right thing to invite the representatives of the U.S. and the U.N., Russian media outlets reported on Tuesday.

The Russian Foreign Minister also added that an invitation had been sent to the new U.S. administration of President-elect Donald Trump, and expressed his opinion that Russia expects the new American administration to accept the invitation.

He also noted that the U.S. taking part in the Astana talks would be a good start to discussing the fight against terror in Syria.

Earlier this week, Turkish Foreign Minister Mevlüt Çavuşoğlu said Russia and Turkey had agreed to invite the U.S. to Astana talks, while also slamming the Obama administration for helping the terrorist People's Protection Units (YPG), which is the terrorist PKK's Syrian offshoot.

"If you invite a terrorist group [PYD/YPG], then you should also invite Al-Nusra, Daesh. This is nonsense," Çavuşoğlu said, responding to the Obama administration's call to invite YPG terrorists to the Syria peace talks.