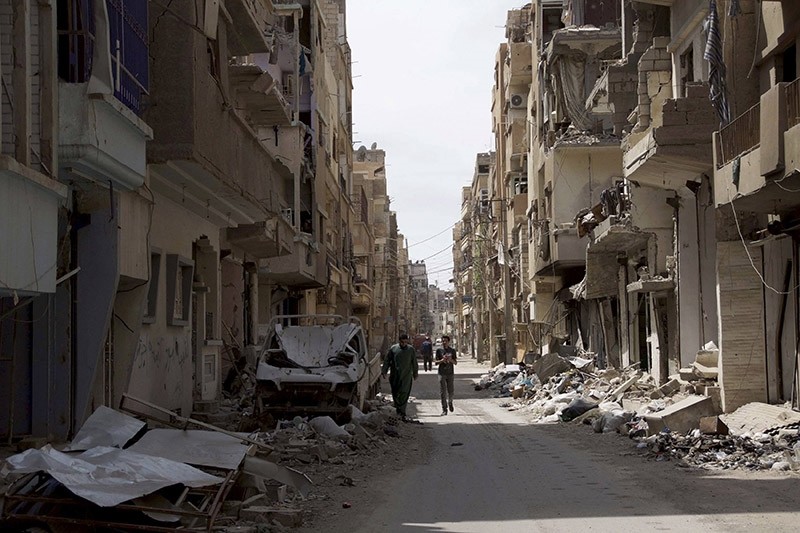 Fierce clashes gripped the eastern Syrian city of Deir el-Zour on Wednesday, a monitor said, as the Daesh terror group set tires ablaze to create a smokescreen from regime warplanes.

An activist group publishing news on the besieged city told that Daesh terrorists had executed 10 Syrian regime fighters captured during the onslaught.

Daesh launched the brutal assault on Saturday to capture the government-held third of Deir el-Zour city, as well as the adjacent military airport.

More than 150 people are reported to have been killed in the fighting.

Syrian and Russian warplanes have carried out intense bombing raids in a bid to halt the Daesh advance, according to a military source and the Syrian Observatory for Human Rights.

Daesh on Tuesday tried to generate a smokescreen to shield its positions from fresh air strikes.

"The Daesh group set tires and barrels of crude oil on fire in Deir el-Zour... to block Syrian and Russian jets heavily bombing the city," the Observatory said.

Since Saturday, 46 regime fighters and 75 Daesh militants have been killed, along with more than 30 civilians, according to the Britain-based monitor.

A local activist group told Wednesday that Daesh had killed at least 10 Syrian government fighters captured during the clashes.

"Daesh executed them last night by driving over them with tanks," said Omar Abu Leila of Deir el-Zour , 24, which publishes news on the eastern city.

He said the gruesome killings took place inside Daesh-controlled neighbourhoods of the city.

"If Daesh seizes regime-held neighbourhoods, it could carry out massacres. This is a huge source of concern for us," he said.

The World Food Programme on Tuesday said the clashes had forced it to suspend aid drops to Deir Ezzor, where more than 100,000 people have lived under IS siege since early 2015.

The WFP has been dropping humanitarian aid into Deir el-Zour since April 2016, and the government-held area is the only place in Syria where the agency has permission for the drops.