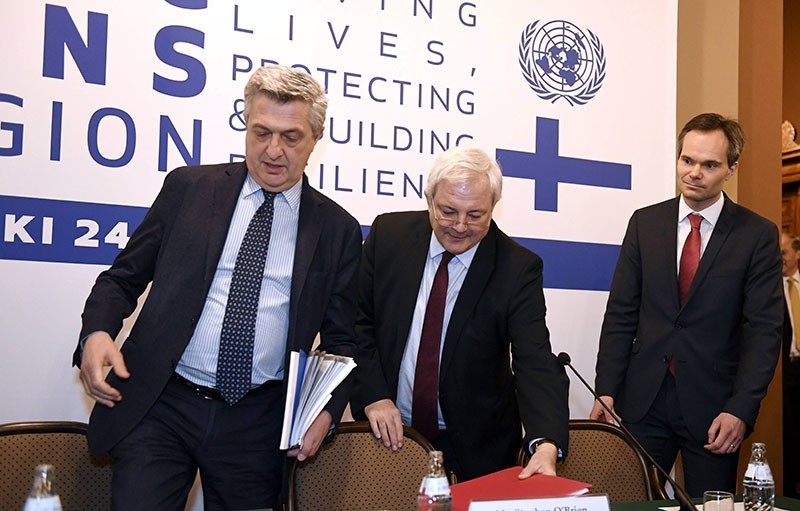 Filippo Grandi, Stephen O'Brien and Kai Mykku00e4nen take their seats for the Conference on Supporting Syrians and the Region in Helsinki, Finland on January 24, 2017. (AFP Photo)
by Compiled from Wire Services Jan 24, 2017 12:00 am

The United Nations said on Tuesday it will need a total of $8 billion this year to provide life-saving assistance to millions of Syrians inside their shattered homeland and to refugees and their host communities in neighboring countries.

The first part, a $4.63 billion appeal for 5 million Syrian refugees - 70 percent of whom are women and children - was launched at a Helsinki conference. Funds will be used to provide food, rent, education and health care.

A separate appeal for an estimated $3.4 billion to fund its humanitarian operation to help 13.5 million people inside Syria after nearly six years of war, is being finalized.

Opening the conference, Finnish Prime Minister Juha Sipila made a strong global appeal for more global help to those affected by the "devastating" war, warning that it has caused "population movements of great magnitude not seen since" World War II.

He said that after six years of the conflict, the humanitarian crisis in Syria "is worse than ever before," with large groups of people in extreme poverty and struggling to survive.

"More than half of the Syrian children are out of school across the region. Hospitals and schools have been destroyed and crucial public services have broken down," Sipila said.

"The crisis in Syria remains one of most complex, volatile and violent in the world," U.N. humanitarian chief Stephen O'Brien told a news conference.

"Of course we fear that it will get worse," O'Brien said. "And even if peace was to take place from tonight, the humanitarian needs within Syria would continue for a good time to come."

"Even if Syrians have stopped arriving in Europe in any significant numbers, I hope that everybody realizes that the Syria refugee crisis has not gone away and continues to affect millions in host communities and continues to be a tragic situation," he said.

"Even were there to be a political settlement tomorrow, we would still be here seeking support for humanitarian relief for a country that has been brought to its knees, with 85 percent living in poverty, 50 percent in unemployment and with the severe economic and social impacts on the neighborhood."

The one-day meetings and panel discussions in the Finnish capital are aimed at charting humanitarian priorities for Syria in 2017 and to launch a regional refugee plan. They coincide with peace talks in the Kazakh capital, Astana, where the host country announced that Russia, Turkey and Iran had struck a deal on a mechanism to consolidate the country's nearly month-old cease-fire.

In addition to U.N. and aid agencies, the Helsinki conference is being attended by government members from Syria's neighboring countries, where most of the refugees have fled.

Donors from civil society and the private sector also discussed new assistance in the wake of last year's pledge of $12 billion made at a Syria aid conference in London. A follow-up to the Feb. 2016 London meeting is scheduled to be held in Brussels in April.