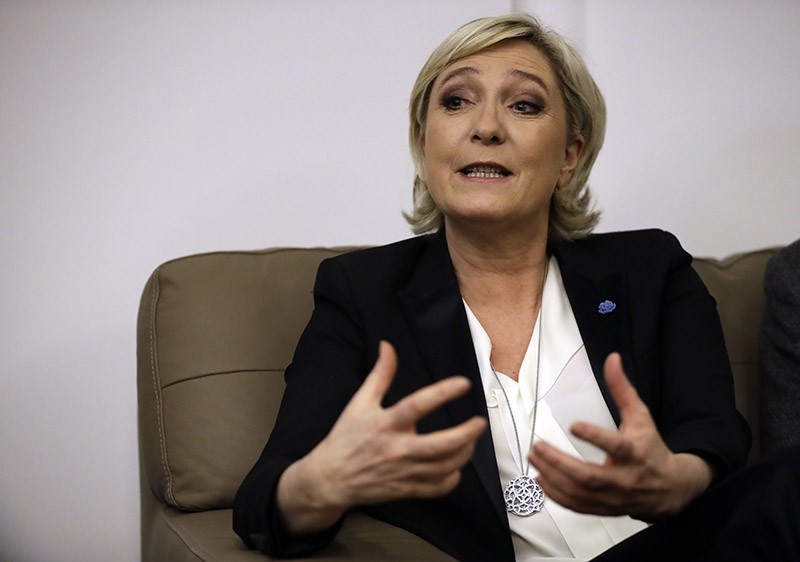 The far-right French leader Marine Le Pen, gestures as she speaks with Byblos mayor Ziad Hawat during her visit to the ancient port city of Byblos, north of Beirut, Lebanon on Feb. 19, 2017. (AP Photo)
by Compiled from Wire Services Feb 21, 2017 12:00 am

French far-right presidential candidate Marine Le Pen tried to raise her international profile and press her pro-Assad stance with a visit to Lebanon on Monday, holding her first campaign meeting with a head of state.

She arrived in Beirut earlier Monday for meetings with Lebanese President Michel Aoun and Prime Minister Saad Hariri, where she discussed means of working together to combat what she describes as ''radical Islam.''

On the first day of her two-day visit, Le Pen called the Syrian dictator Bashar Assad "the most reassuring solution for France" and said the best way to protect minority Christians is to "eradicate" the Daesh group preying on them — not turn them into refugees.

Meanwhile, Assad is considered as the main responsible for the ongoing civil war in Syria which started in 2011, instigated by the Assad regime which cracked down on pro-democracy protests that had began as part of the Arab Spring uprisings, with unexpected ferocity and disproportionate force. More than 600,000 people were killed and some six million people were displaced in the conflict.

Lebanon, a former French protectorate, shares a large border with Syria, and has taken in some 1.2 million Syrian refugees — the equivalent of one-fourth of its own population.

The trip represents the first major foray into foreign policy for Le Pen, a leading candidate in France's April 23 and May 7 election. She is hoping to burnish her credentials as a defender of Christians in the Middle East, looking to win votes of the thousands of French citizens in Lebanon and have an impact on the international scene.

She said she told Lebanese Prime Minister Saad Hariri that there is "no viable and workable solution" to the Syrian civil war beyond choosing between Assad and Daesh.

"I clearly explained that in the political picture the least bad option is the politically realistic. It appears that Bashar al Assad is evidently today the most reassuring solution for France."

Le Pen has made known her pro-Assad position in the past, but it took on extra weight in the context of her high-profile foreign visit. Her stance represents a major divergence from official French policy and that of Hariri, who is opposed to the dictator.

In the fractious politics of Lebanon, President Michel Aoun, whom Le Pen also met, supports Assad and the Iranian-backed Hezbollah working to bolster him.

An official readout of the meeting suggests that Hariri took umbrage at what is widely seen as Le Pen's stigmatization of Muslims, who her followers claim are changing the Christian face of France.

"Muslims are the first victims" of terrorism, Hariri was quoted as saying in the summary of the meeting, and moderate Muslims are "the first bulwark against extremism."

"The worst mistake would be the amalgam between Islam and Muslims on one hand and terrorism on the other hand."

Hariri called on the international community to carry out their responsibilities to help his country with the crisis, which is subjecting its economy and infrastructure to unparalleled pressures.

Before meeting with the prime minister, Le Pen met with Aoun, saying they agreed during the meeting that the two countries should be "pillars" in organizing the fight against ''fundamentalism.''

During her two-day visit, Le Pen was also to meet the Christian Maronite patriarch.