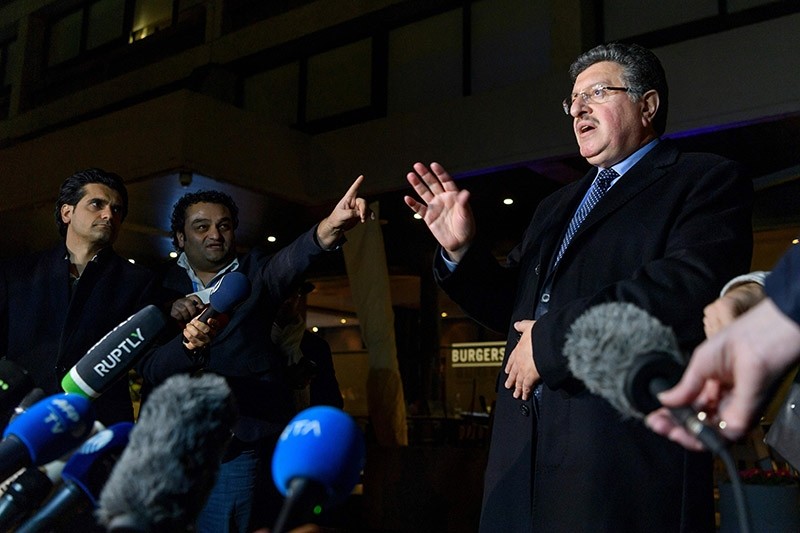 Salem al-Meslet (R), spokesman for the High Negotiations Committee (HNC) umbrella group, speaks to journalists on the eve of resumption of peace talks on Syria, on February 22, 2017 in Geneva, Switzerland. (AFP Photo)
by Daily Sabah with Wires Feb 23, 2017 12:00 am

Syrian peace talks under the auspices of the United Nations have resumed in Geneva, 10 months after they fell apart over escalating bloodshed in the war-torn country.

U.N. Syria envoy Staffan de Mistura is convening his first morning meeting with the delegation of the Assad regime, headed by Bashar al-Ja'aafari, on Thursday.

He is then expected to meet with Nasr Hariri, a senior member with the largest opposition group, the Syrian National Coalition.

Opposition delegates have been arriving in Geneva since Wednesday and some held late night meetings in preparation for the talks.

This is the fourth round of negotiations since early last year.

Turkey and Assad's two primary backers Russia and Iran have organized separate negotiations in the Kazakhstan capital of Astana.

The advisers of Syria's main opposition and the Assad regime gathered in Astana Thursday for the second round of talks in discussions regarding the continuity of the nationwide cease-fire in Syria.

Meanwhile, Turkish diplomatic sources speaking anonymously to Anadolu Agency (AA) ahead of the Syrian peace talks in Geneva said that the "transition of full authority" should be established in accordance with the U.N. resolution.

The sources stressed the Syrian people should draft their own Constitution under a new transitional administration, claiming Russia's proposed constitution calls into question the unity of Syria.

The Syrian civil war started in 2011 when the Assad regime cracked down on pro-democracy protests, that had began as part of the Arab Spring uprisings, with unexpected ferocity and disproportionate force.

More than 600,000 people were killed and some six million people were displaced in the conflict.