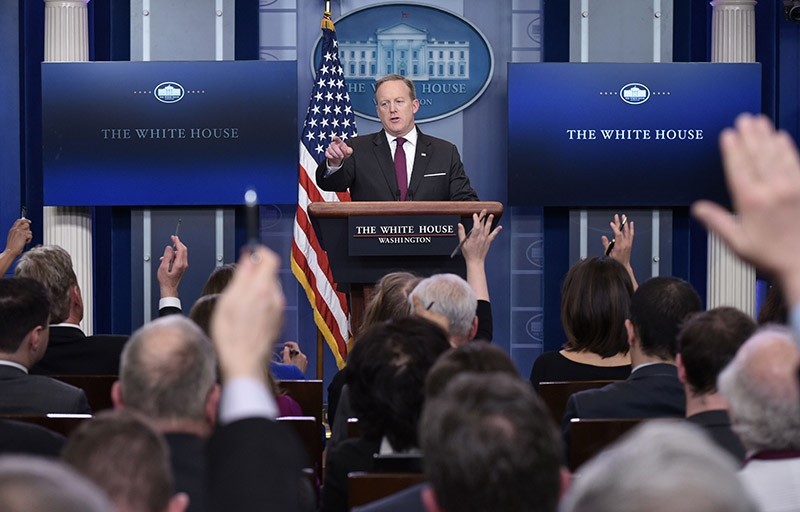 White House Press Secretary Sean Spicer speaks during the daily briefing in the Brady Briefing Room of the White House on February 23, 2017 (AFP Photo)
by daily sabah
Feb 24, 2017 12:00 am

U.S. President Donald Trump's Press Secretary Sean Spicer said on Tuesday that "safe havens" in Syria were "at the top of the president's foreign policy agenda" but the geographic location of these zones remain unspecified at the moment.

One reporter cited the recent developments in al-Bab, which was cleared of Daesh terrorists and is now in control of Turkey-backed Free Syrian Army (FSA) fighters, and asked if the president envisioned a safe zone in this area.

Spicer replied, "We're not trying to be prescriptive right now in terms of the geographic location of a safe zone. It's something that—right now, the president's goal is to get commitments from other world leaders, both in terms of the funding and the commitment to share in how we do that."

Last week, President Trump said in a campaign speech that the Gulf States would be paying for the safe zone in Syria. When asked about the financing of a safe zone, Spicer said, "There has been a general commitment by most of these heads of government to share in the president's commitment to help fund these things."

Spicer did not answer questions about a timeline for creating a safe zone within Syria.

Trump added that Europe had made a huge mistake by admitting millions of refugees into their countries, saying, "I don't want that to happen here."

Making a safe zone in northern Syria will require the support of both Turkey and Russia, and possibly the Assad regime, all of whom have voiced concerns over the proposed safe havens.