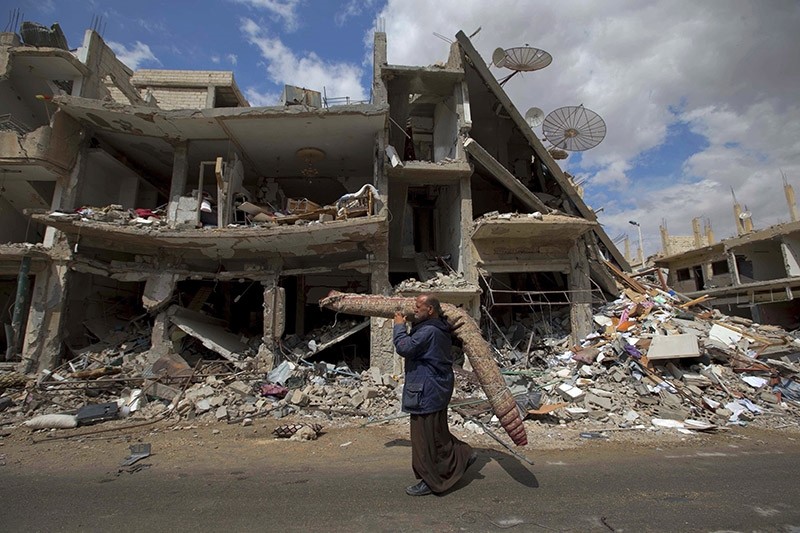 A Syrian man carries a carpet through a devastated part of the town of Palmyra as families load their belongings onto buses in the central Homs province in Syria. (AP File Photo)
by Daily Sabah with DPA Mar 02, 2017 12:00 am

Forces loyal to the Assad regime have entered Palmyra as part of an operation to oust Daesh militants from the ancient city, a monitoring group says.

"The Assad regime troops accompanied by their allies, backed by Russians planes have entered the first neighborhood of al Mutakadeen which is located in the western sector of city," Rami Abdel Rahman, head of the Britain-based Syrian Obsevratory for Human Right reported.

Abdel Rahman said the regime is now fully controlling the western and north-western sectors of the outskirts of the city of Palmyra.

He added that reports are saying that Daesh militants have withdrawn from inside the city of Palmyra.

Daesh has put up a strong fight, managing to foil various attacks by the Assad regime in recent days.

Palmyra, which is a UNESCO world heritage site, was seized by Daesh terrorists in 2015, before being recaptured by Assad regime in March 2016. However, Daesh retook Palmyra in an unexpected offensive in December 2016 while the Assad regime and its allies were focused on gaining ground in Aleppo against moderate Syrian opposition forces.