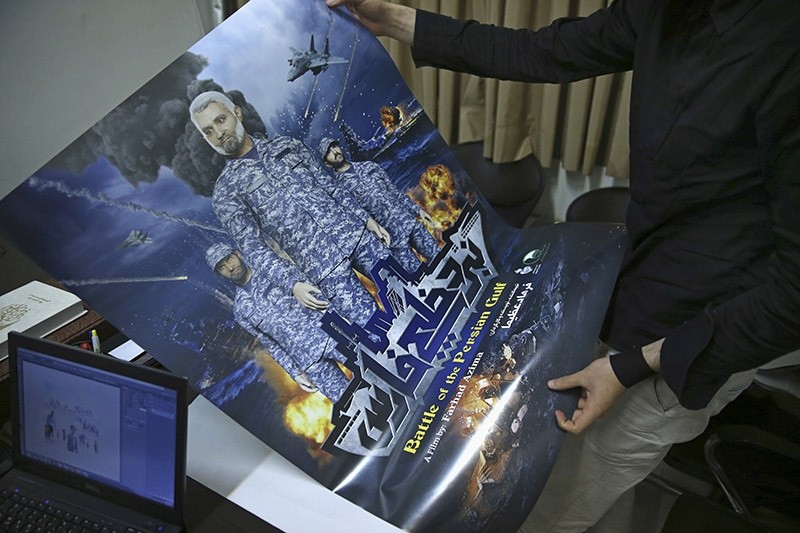 A production assistant for the animated film, ,Battle of the Persian Gulf II,, holds a poster for the movie, at the office of Farhad Azima in Tehran. (AP Photo)
by Mar 05, 2017 12:00 am

A new animated film from Iran shows the US Navy's Fifth Fleet being blown out of the water in the latest effort to build up the legend of the country's most celebrated general.

Director Farhad Azimi told local media his 80-minute "Battle of the Persian Gulf II" is "a response to the gibberish of Hollywood and American politicians".

Four years in the making, its expensive graphics, thumping soundtrack and barrages of missiles are a slick addition to Iran's propaganda efforts, clearly aimed at teenage boys.

The star of the show is a commander whose salt-and-pepper beard was explicitly modelled on Major-General Qassem Soleimani, head of the Revolutionary Guard's external operations arm, the Qods Force.

Soleimani heads Iran's operations in Syria, Iraq and beyond, and has become a prominent fixture in the media in recent years, often pictured on the frontline or alongside supreme leader Ali Khamenei.

His high profile has led to speculation he may emerge as a presidential candidate one day, although he has so far denied any desire to move into politics.

"Battle of the Persian Gulf II" cost some five billion rials ($140,000 130 million euros) to make, part of increasing military propaganda efforts that in many ways mirror the close involvement of the Pentagon in Hollywood's more gung-ho blockbusters.

It comes at a time of mounting tensions after President Donald Trump warned that any Iranian boats harassing the US Navy -- a regular occurrence in the Gulf, according to the Pentagon -- would be "shot out of the water".

"If one bullet is fired by the enemy toward Iran, we will respond firmly," he said.

The film has premiered in Iran's second city Mashhad and is due to arrive in Tehran next week. The makers are also hoping to show the film in China and Russia.