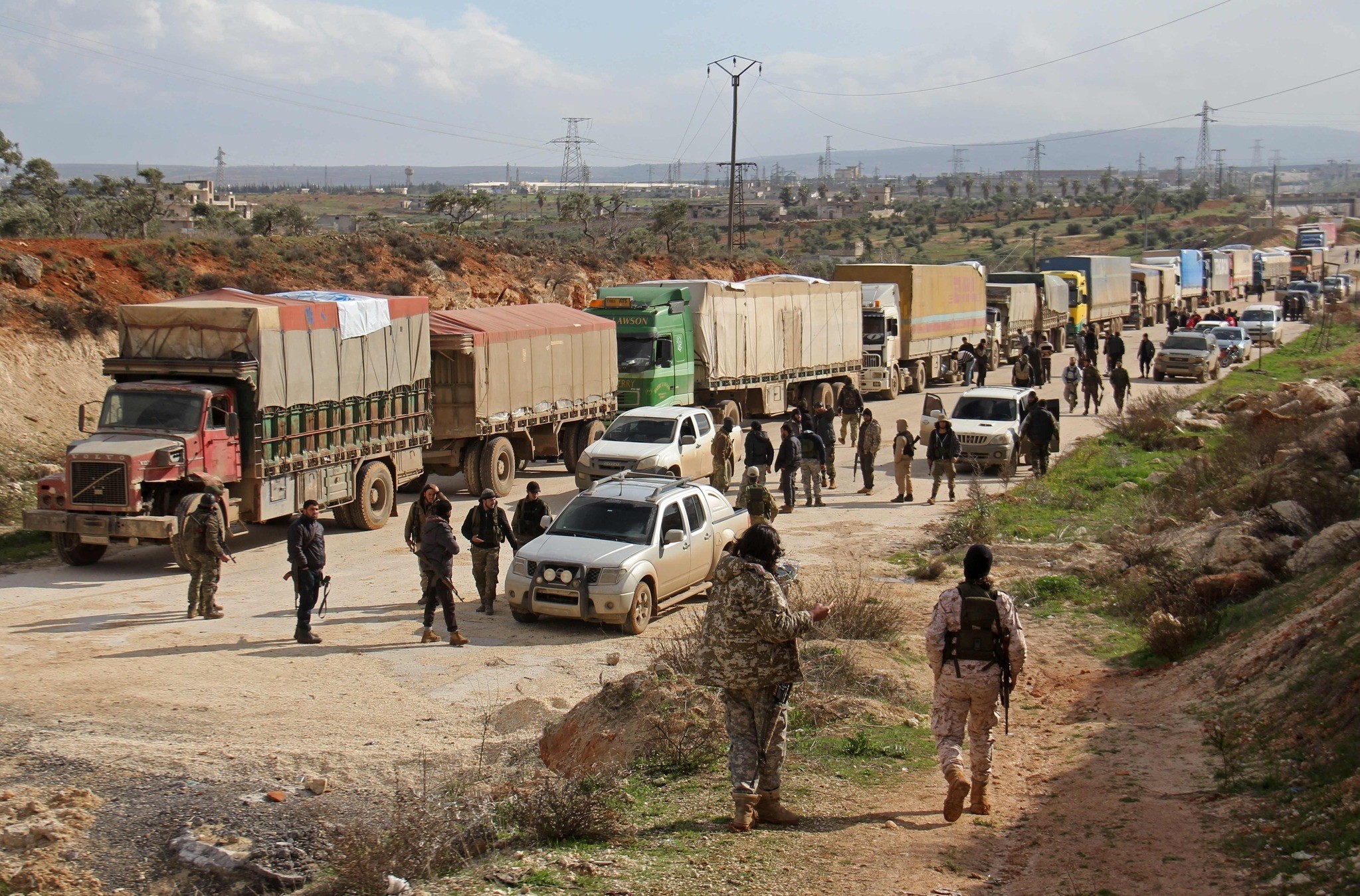 Opposition fighters and aid workers stand near a convoy of vehicles carrying United Nations food and medical aid on the outskirts of Kafraya. (AFP Photo)
by Compiled from Wire Services Mar 14, 2017 12:00 am

Aid convoys began entering four besieged towns in Syria on Tuesday, delivering food and medical supplies to 60,000 people for the first time since November, the International Committee of the Red Cross (ICRC) and the United Nations said.

Separate convoys of trucks were carrying medical supplies, food, wheat flour, and nutritional items to some 40,000 people in Madaya and Zabadani, two towns blockaded by pro-regime forces near the Lebanese border, and to 20,000 in Foua and Kafraya in Idlib, a spokeswoman said.

Kevin Kennedy, U.N. regional humanitarian coordinator for the Syrian crisis, said on Tuesday that not a single inter-agency convoy last month was able to deliver, of 20 that were requested.

Dozens of trucks were supposed to enter the besieged areas, but it was not immediately clear if all would make it in. Previous planned deliveries have been canceled at the last minute or halted because of fighting.

The regime-controlled Syrian Central Military Media released a video showing a convoy of SUVs from the International Committee of the Red Cross and the Syrian Arab Red Crescent escorting at least two trucks into Madaya. It gave no further details.

The delivery came a month after the U.N. humanitarian coordinator for Syria appealed to all parties to reach an agreement for immediate access, saying that aid has not reached the areas since Nov. 28. Some 60,000 people live in the four besieged areas, according to the U.N.

Hundreds of thousands of people live in besieged areas around Syria, mainly in areas surrounded by pro-regime forces.

The U.N. embarked on an ambitious plan early in 2016 to establish regular humanitarian access, but it was reportedly stymied by the regime as well as an agreement between the warring parties to limit assistance to 60,000 of the most distressed, divided among the four towns.

The flow of aid to the four villages came hours after Physicians for Human Rights issued a report in which it accused the Syrian regime of willfully denying international shipments of food and medicine to many Syrians in besieged areas.

Earlier Tuesday, a U.N. investigative commission said it believes regime forces deliberately bombed a school complex in the northern countryside in October, killing 21 children, in a scathing report on alleged crimes committed in Syria over the last seven months.

The U.N.'s Independent International Commission of Inquiry on Syria said regime forces and their allies had shown a "complete disregard for civilian life and international law" through continued use of cluster munitions, incendiary weapons and chlorine gas.

It also fingered an al-Qaida-aligned insurgent group and the PYD/YPG terror group for conscripting adolescents for combat.

The commission said the Oct. 26 attack on the Haas village school complex in the rebel-held province of Idlib constituted a war crime. It said the Syrian regime air force is the only one known to operate the jets identified in the attack, which was widely reported at the time.

The commission's report also concluded that regime forces deliberately targeted the capital's water infrastructure last December, threatening supplies to 5.5 million people. It said the attack was unjustified, and constituted a war crime. It did not find any evidence that the opposition had poisoned the water supply, as state media alleged.

The Syrian regime and its ally Russia maintain they are fighting terrorism.

It is the third summit in Astana running parallel to political talks in Geneva between the regime and the opposition. The Astana talks are centered around cease-fire and humanitarian relief coordination, but have brought few results.

The Syrian opposition has boycotted this third round, citing the regime's continued bombardment of opposition-held areas in Homs and Damascus. On Monday, activists and the regime said a deal had been reached to evacuate opposition forces and their families from the Homs neighborhood of al-Waer, ending more than three years of regime siege.

Thousands of civilians were expected to depart al-Waer as well, rather than risk conscription or arrest by the Syrian security services. They will be sent to opposition-held Idlib and other opposition pockets around the country. The U.N. condemned a similar agreement that returned the city of Aleppo to regime control as a war crime.