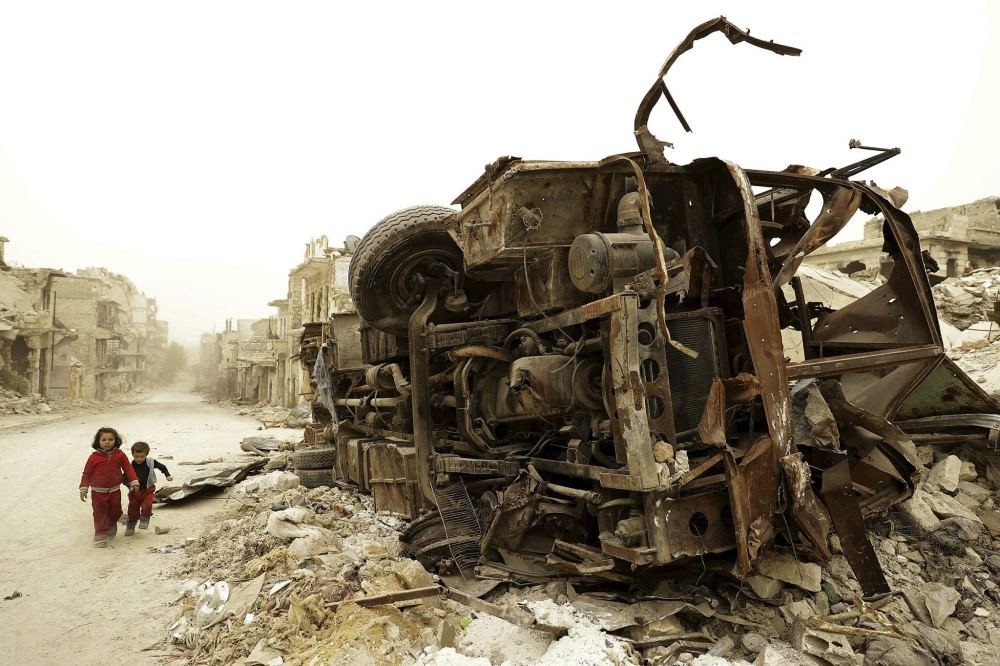 Syrian children play during a sandstorm in the old part of the northern city of Aleppo on March 10.
by Daily Sabah with Wires Mar 14, 2017 12:00 am

As Europe closes its borders to refugees, Syrians have been trapped by violence in the war-ravaged country for the last seven years. Syrian children are bearing the burden of the ongoing conflict with at least 652 killed in Syria in 2016, UNICEF reports

As the war enters its seventh year, Syrian children are among those most vulnerable to the conflict with at least 652 children killed in 2016, making it the worst year yet for the country's rising generation, the United Nations' child relief agency said yesterday. UNICEF said that cases of children being killed, maimed, or recruited into armed groups were the "highest on record" last year. "The depth of suffering is unprecedented. Millions of children in Syria come under attack on a daily basis, their lives turned upside down," said Geert Cappelaere, UNICEF's regional director.

However, amid growing violence and cruelty against Syrian children, European countries have slammed their borders shut while further traumatizing people who have fled violence through harsh immigration policies.

Hungary lately announced that all asylum seekers - both those who entered Hungary earlier and newcomers - are to be held in "transit zones." That includes children. The three transit zones are located along Hungary's heavily fortified border with Serbia, from where nearly all of the refugees and migrants arrive. The UNHCR warned that, by confining asylum seekers, Hungary is violating international rules and further traumatizing people who have fled violence. "This new law violates Hungary's obligations under international and EU law, and will have a terrible physical and psychological impact on women, children and men who have already greatly suffered," UNHCR spokeswoman Cecile Pouilly said.

Austria introduced daily and yearly limits for the number of asylum seekers it would let in each day, prompting the Balkan countries to react with their restrictive measures in March. Austria wants to introduce fines of up to 15,000 euros soon for rejected asylum seekers who refuse to leave the country. Those who are not deterred can be detained for up to 18 months.

As the Balkan route has been shut for a year, many migrants are still stuck or have disappeared in Greece while others pile up in Serbia.

UNICEF said that 2.3 million Syrian children are living as refugees in Turkey, Lebanon, Jordan, Egypt, and Iraq. Another 280,000 still live under siege across Syria, with no access to food or medicine, it said. To cope with increasingly difficult living conditions, families inside Syria and in host nations have been forced to push their children into early marriages or child labor just to survive. "There is so much more we can and should do to turn the tide for Syria's children," said Cappelaere.

UNICEF said at least 255 children were killed in or near schools last year and 1.7 million youngsters are out of school. One in every three schools in Syria is unusable, some because armed groups occupy them. An additional 2.3 million Syrian children are refugees elsewhere in the Middle East.

The figures come in a UNICEF report released two days before the sixth anniversary of the popular uprising that escalated into civil war.

Children were among the first victims of Bashar Assad's brutal crackdown. On March 15, 2011, residents in the southern city of Daraa marched to demand the release of teenage students arrested for writing anti-regime slogans on their school's walls. They were tortured in detention.

Syria's war has killed just over 320,000 people since it erupted six years ago, the Britain-based Syrian Observatory for Human Rights said yesterday. The monitor had recorded the deaths of 321,358 people since the conflict broke out in March 2011 with protests against Syrian regime.
Last Update: Mar 14, 2017 10:29 am
RELATED TOPICS