US plans on deploying additional 1000 troops in Syria 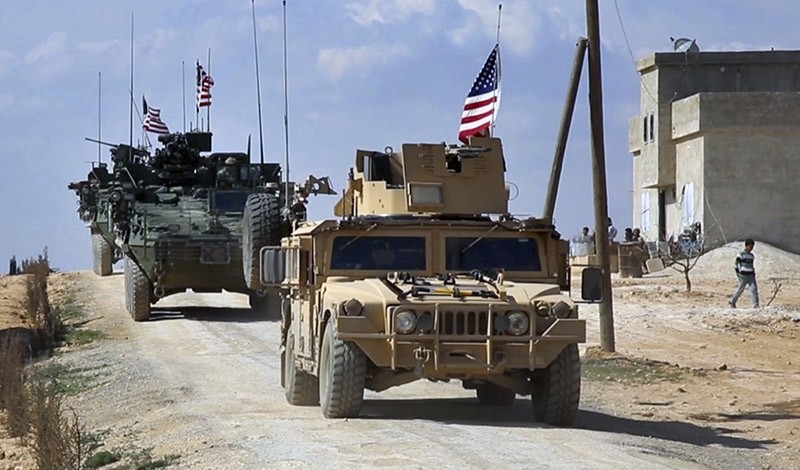 Frame grab from video provided by Arab 24 network, shows U.S. forces patrol on the outskirts of the Syrian town, Manbij, a flashpoint between Turkish troops, FSA and U.S.-backed YPG, in al-Asaliyah village. March 2014. (Via AP)
by Daily Sabah with AFP Mar 16, 2017 12:00 am

Up to 1,000 additional US troops could deploy to northern Syria under provisional plans drawn up by the Pentagon, a US defense official said on Wednesday.

The plans, which still need to be approved by President Donald Trump and Defense Secretary Jim Mattis, would mark a significant uptick in US boots on the ground in Syria as part of the fight against the Daesh terror group.

Currently, the troop level is capped at 500 in Syria, but that number has become increasingly meaningless as commanders flow extra "temporary" forces in as needed -- such as last week's deployment of a Marine artillery battery near Raqqa.

The actual number of American troops in the war-torn country is likely now between 800 and 900, and a US defense official said the new plans would allow for up to 1,000 more.

"That's one of the proposals that's on the table for discussion," the official told AFP, speaking on condition of anonymity.

The possible deployment was first reported by the Washington Post, which said the extra forces would come from the 24th Marine Expeditionary Unit and the US Army's 82nd Airborne Division.

The official said the troops would not be in direct combat, but rather serve in support roles for any additional capabilities the military requires in northern Syria, where a US-led coalition is training and backing Syrian Democratic Forces (SDF), which is dominated by the PKK's Syria offshoot, the People's Protection Units (YPG), to fight Daesh.

Such missions could include additional artillery batteries and the use of rocket launchers known as HIMARS that can provide round-the-clock bombardment in the battle to recapture Raqqa from Daesh.

Former president Barack Obama was loath to deploy combat troops into Syria and Iraq to fight Daesh, arguing the battle could only be meaningfully won by local forces.

Trump has said he wants to quicken the defeat of Daesh and told the Pentagon to come up with a range of plans that could accomplish that goal.

Washington's recent Syria policy has relied heavily on support from the terrorist YPG, the armed wing of the PYD.

That has vexed Ankara, which designates both groups Syrian branches of the PKK terror group. The SDF is primarily composed of elements of the YPG group, which Turkey sees as the Syrian offshoot of the PKK — a group designated as a terrorist organization by both the U.S. and Turkey.

Washington has refrained from following suit on the YPG, but has insisted that it's training and material support for the SDF does not go to the YPG.

Syria is marking the sixth anniversary of its brutal civil war, which began with anti-government protests in March 2011 and has killed several hundreds of thousands of people.

The "United States does remain committed to finding a peaceful, diplomatic resolution to the Syrian conflict," State Department spokesman Mark Toner said. "All of us know how hard that is.