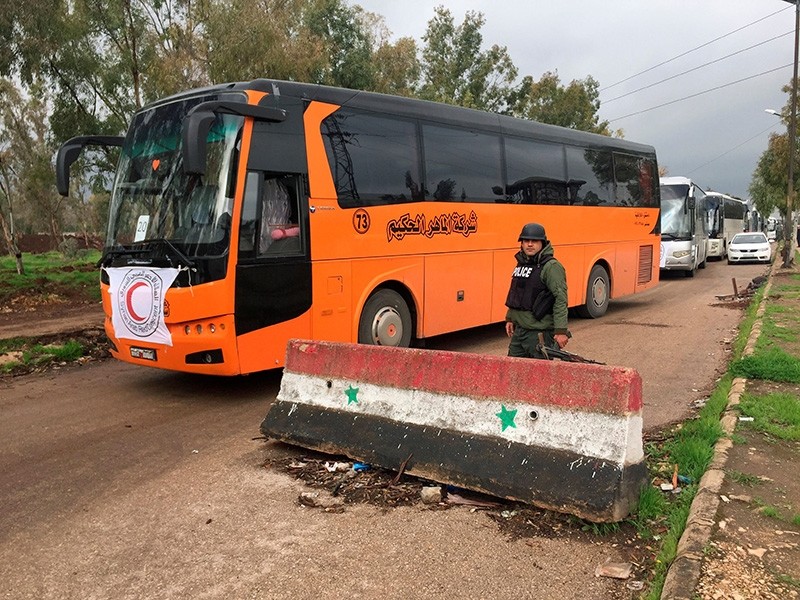 Buses drive past a regime soldier to evacuate opposition fighters and their families from the besieged Waer district in the central Syrian city of Homs, Syria, March 18, 2017. (Reuters Photo)
by Compiled from Wire Services Mar 18, 2017 12:00 am

Residents and fighters began leaving an opposition-held district in the central Syrian city of Homs, around a week after a ceasefire agreement was reached with the regime, state media and a monitoring group reported.

More than 1,500 people are expected to be evacuated from the neighborhood of al-Waer on Saturday, including around 500 rebels, according to the Syrian Observatory for Human Rights.

Homs governor Talal Barazi told Reuters 400 to 500 fighters would evacuate on Saturday, along with their family members.

Under the agreement, more than 12,000 people would leave in batches over the coming weeks, according to the Observatory. The deal is expected to be the largest of its kind, and prompted protests on forced relocation of people.

The convoy will take them to the city of Jarablus, near the border to Turkey. Jarablus is controlled by the Turkey-backed Free Syrian Army (FSA), dubbed Euphrates Shield, the Observatory added.

A convoy is expected to carry 1,500 people every week.

The state-run SANA news agency reported that the evacuation is supervised by the Syrian Red Crescent as well as Russian and Syrian troops.

The deal had been negotiated between a Russian team and rebels, stipulating that around 12,000 people will leave al-Waer area, among them 2,500 fighters.

Al-Waer is the only neighborhood still under opposition-control in Homs after regime troops took over the city in 2014. It has been besieged by regime forces for about five months.