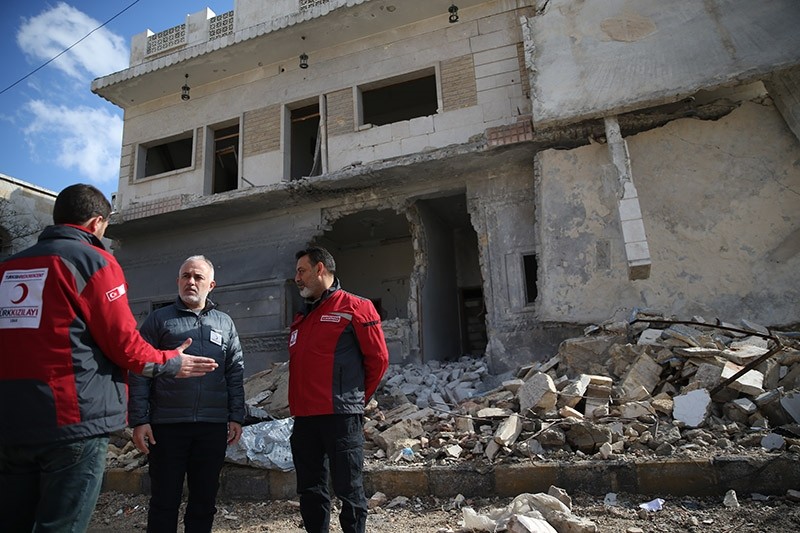 Most parts of a northern Syrian town captured from Daesh have suffered widespread destruction and the Turkish Red Crescent will provide all kinds of support to help daily life return to normal, according to the organization's head.

Kerem Kınık told Anadolu Agency on Monday that nearly 75,000 people were living in the al-Bab area.

"Almost 60 percent of al-Bab was heavily destroyed. Turkey will provide support in various areas like education, health, humanitarian aid and municipal works to help daily life return to normal and to remove the rubble," Kınık said.

He listed accommodation, food and health supplies as the primary needs of residents, some of whom are still awaiting medical treatment for injuries.

"There is a child suffering from a broken arm and we are dressing his wounds… Some of these patients are being taken to Turkey for treatment and some of them are being treated here [al-Bab] by our doctors," he added.

"The Turkish Red Crescent will support a damaged hospital here to operate and will equip it. It will be ready in 15 days… At least, emergencies will be responded to in this hospital. After that, our health ministry is planning to build a fully-equipped hospital like in Jarabulus."

Al-Bab was captured from Daesh by Turkey-backed Free Syrian Army (FSA) on Feb. 24 as part of Operation Euphrates Shield, which began in August.

After having completed successful operations in Jarabulus, al-Rai, Dabiq and al-Bab, the FSA forces could next lead the Raqqah -- Daesh's self-proclaimed capital -- operation, according to Turkish authorities.

Syria has been locked in a vicious civil war since early 2011, when the Bashar al-Assad regime cracked down on pro-democracy protests -- which erupted as part of the Arab Spring uprisings -- with unexpected ferocity.

Since then, more than a quarter-million people have been killed and more than 10 million displaced across the war-battered country, according to the United Nations.