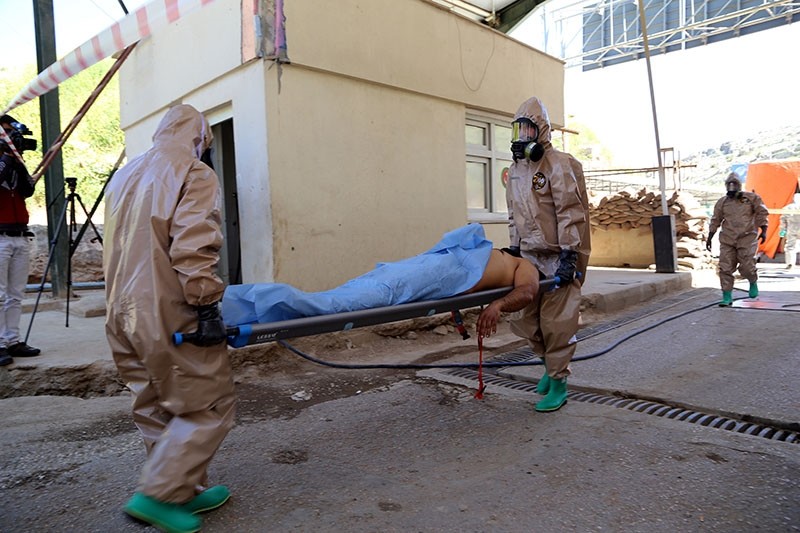 Autopsy results confirm that chemical weapons were used during the attack by the Assad regime in Syria's Idlib, Turkish Justice Minister Bekir Bozdağ said Thursday, while the health ministry noted that evidence linked to sarin gas was found during the autopsy.

Addressing reporters in central province of Kırıkkale, Bozdağ said the examination was carried on three bodies that were brought from Idlib to southern Turkish province of Adana. Minister Bozdağ added that a World Health Organization (WHO) representative, a delegation from the Organization for the Prohibition of Chemical Weapons (OPCW) also attended the autopsies, during which the process was filmed and samples were collected both by WHO representatives and Turkish forensics experts for further examination.

The public prosecutor's office in the southern city of Adana also said in a statement that the tests were done by Turkish forensic experts along with Annette Heinzelmann of the WHO and Sahar Yazbek and Sami Berrak from the OPCW.

The victims whose bodies were autopsied were named as Asma Al Hasan (35), Said Huseyin (26), and Muhammad Awad (25), all of whom were brought to Turkey on Tuesday following the deadly attack, the statement read.

Tests were conducted at the city's forensic institute under the supervision of the prosecutor's office, it added.

Later on in the day, Health Minister Recep Akdağ said that autopsy results from Idlib chemical attack will be examined in the Hague after Turkey.

The health ministry said that evidence linked to sarin gas was found in the bodies of three victims transported to Turkey after the chemical weapons attack in Idlib.

Following Tuesday's attack in opposition-held town of Khan Sheikhun, which killed at least 86 people and wounded dozens of others, more than 50 patients were transferred to Turkey for treatment, three of whom lost their lives in hospitals inside the country.

A statement released by the WHO on Wednesday pointed that a nerve agent was used in the attack, which was defined as a war crime. WHO said the victims of the latest attacks show symptoms of nerve agent damage "including acute respiratory distress as the main cause of death. Some cases appear to show additional signs consistent with exposure to organophosphorus chemicals, a category of chemicals that includes nerve agents."

While international monitors put the death toll at 86, local sources stated that the attack killed more than 100 civilians and injured some 500 more.

The attack was strongly condemned by the international community.