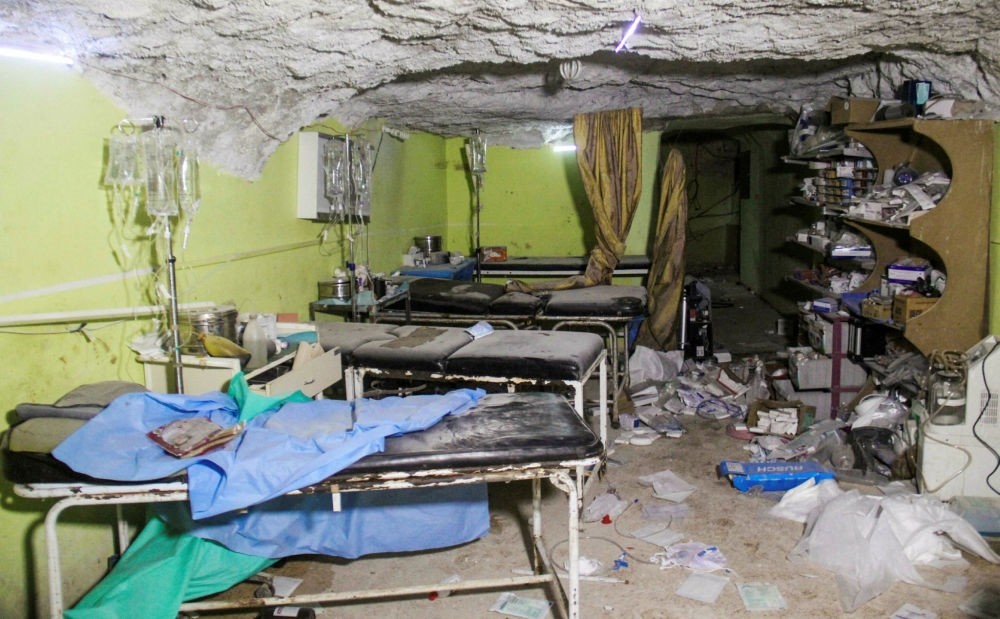 UOSSM and PAC have released a report on the state of hospitals in Syria, revealing that the regime has repeatedly attacked hospitals, which suffer from a shortage of both medical staff and equipment

The Syrian civil war has been one of the fiercest and most ruthless wars the world has ever witnessed. Besides causing turmoil in terms of destabilizing the entire region, increasing sectarian rifts and paving the way for the spread of terror groups like Daesh and the PKK's Syrian offshoot the Democratic Union Party (PYD), the war has been a horrific display of the Bashar Assad regime's blatant disregard for international law and ethical rules. A report, recently released by the Union of Medical Care and Relief Organizations (UOSSM) and Physicians Across Continents (PAC), revealed that the regime is increasingly targeting hospitals.

Last week's chemical gas attack on a medical clinic in Idlib near the Turkish border coupled with the destruction of all the hospitals in Aleppo during the fiercest battles of the war, seen last November, have proven that the regime is not bound by any humanitarian or moral principles.

The report says, "The first two surveys were completed in April 2015 and October 2015, when 113 hospitals were accessed. In the current December 2016 study, 107 hospitals (63 in the northern region and 44 in the southern region) were accessed out of 130 hospitals documented in the two regions," concluding that hospitals and medical clinics in the country must be fortified to withstand the airstrikes.

"The survey showed that all hospitals have been targeted at least once with a direct or indirect airstrike, and some have been targeted up to 25 times. Three quarters of the current hospitals are field hospitals established in pre-existing buildings, which were not originally designed as hospitals. Unlike previous surveys, this study demonstrates that security measures are urgently needed to protect the hospitals," it said. The report also underlined that the number of doctors and medical staff is not enough at all; therefore meaning that every doctor has to work in more than one hospital at any given time. The fact that non-certified medical staff work in the hospitals, also pose a danger to the treatment of people.

"A large number of health professionals share their services with multiple hospitals. In fact, more than 40 percent of the doctors, regardless of their specialty, work in more than one hospital. Moreover, we observed that the number of medical residents is scarce in comparison to the number of specialists; the ratio of resident to specialist doctors is one-to-five while the ratio of non-certified to certified health care staff is three-to-seven."

The report said the hospitals were not fully equipped and suffering from shortages of staff and medical equipment. Moreover, most of the buildings, used, as hospitals had not been initially designated as hospitals.

"We found that only 26 buildings were originally designed to be hospitals, 10 buildings were previously schools, and the rest were either government or residential buildings transformed into hospitals. Four hospitals were established in caves to add extra protection from airstrikes," it said.

The report also underlined the fact that the regime has started targeting more hospitals, compared to previous years.

"In 2016, most hospitals were targeted directly by airstrikes at least twice, with an average of three attacks per hospital. Some hospitals; for example, those in rural Damascus, were targeted 25 times. Aerial bombardment of a hospital's surroundings has been documented at an average of seven times per hospital. In some areas, the number of airstrikes near hospitals exceeded 100. A total of 1,000 direct and indirect attacks on hospitals occurred in 2016," the report said.

Due to the attacks, many vital medical equipment have been damaged and become inactive, according to the report.

"Critical screening equipment for testing such as mammograms is totally non-existent. The amount of non-functional equipment is very high, indicating a need for biomedical workshops to increase the maintenance of medical machines and technician repair skills," it said in the conclusion.

The report also drew attention to the fact that doctors are leaving the country. "Medical staff numbers have declined in some critical specialties, such as general and orthopedic surgery. In 2016, the ratio of doctors to the population was 2 to 10,000, dropping further below the recommended international ratio. This reflects the emigration or resignation of physicians and specialists, particularly in areas where safety is not secured," it wrote.

In March 2011, Syrians were emboldened enough to raise their voice against Assad's dictatorship. However, the regime's response was not as peaceful as protesters expected and the country was subsequently dragged into a deadly civil war after opposition groups took up arms against the government. The Syrian civil war has now entered its sixth year and has caused the deaths of more than 400,000 people with at least 100,000 still missing. The war has also left nearly 10 million people displaced. The vast majority of Syrian refugees have fled to Lebanon, Jordan, Iraq and Turkey.

As a result, Syria has become a scene for a reckless war and for the use any kind of weapons. Although the latest chemical attack resulted in limited military action carried out by the U.S., there is no guarantee that it will not be repeated since the Hague-based Organization for the Prohibition of Chemical Weapons (OPWC) said previously it had evidence of the use of chlorine gas in repeated attacks by regime forces in Syria.

The OPWC said there has been a "spate of new allegations" of chlorine attacks several times. The regime had agreed to destroy its chemical weapons arsenal in 2014, following global outrage over a sarin gas attack in Ghouta, a suburb of Damascus, in August 2013 that killed hundreds. It was the worst attack of its kind in a quarter-century.

However, opposition groups claim the regime has not handed over its entire chemical stockpile and still uses chemical weapons against its own people. Although the U.S. and other Western countries attempted to prevent the regime from using chemical weapons, with former U.S. President Barack Obama designating the use of chemicals as a red-line and even considering military intervention, there had been no deterrent action prior to the Donald Trump administration's recent action.
RELATED TOPICS