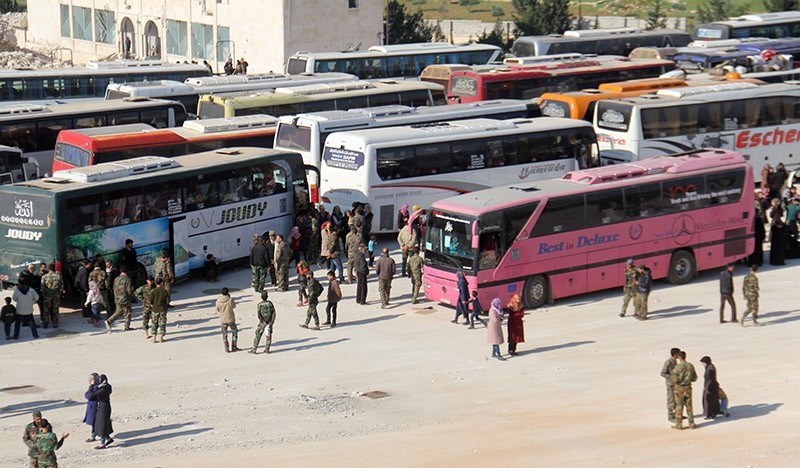 A new group of people on Wednesday left long-besieged Syrian towns as part of an evacuation deal between the Assad regime and opposition that went into effect last week, a monitoring group reported.

Forty-five buses, transporting around 3,000 people, early Wednesday left the two villages of Foua and Kefraya in the north-western province of Idlib heading for the regime-held city of Aleppo, the Syrian Observatory for Human Rights added.

The watchdog also reported the transfer included 800 armed men from both sides.

Simultaneously, 11 buses carrying more than 300 evacuees from regime-encircled towns near Damascus were on their way to Idlib, which is mostly controlled by the opposition, according to the Observatory.

The evacuation agreement, brokered by Iran and Qatar, went into effect on Friday.

It aims to move opposition members, mostly Sunnis, from the towns of Madaya and al-Zabadani near Damascus to Idlib. In return, regime supporters, mainly Shiites, would be moved to regime-held areas.

The reciprocal evacuations from two pro-regime villages and two opposition-held towns was disrupted by a bombing Saturday that killed more than 120 evacuees, mostly children.

The Syrian opposition condemns the swap deal as a forced displacement.

In February, the United Nations said around 4.7 million people live in hard-to-reach locations across the country, including more than 640,000 in besieged locations.

The crisis soon spiralled into a multilateral civil war that has claimed hundreds of thousands of lives and displaced about half the pre-war population of 22 million.