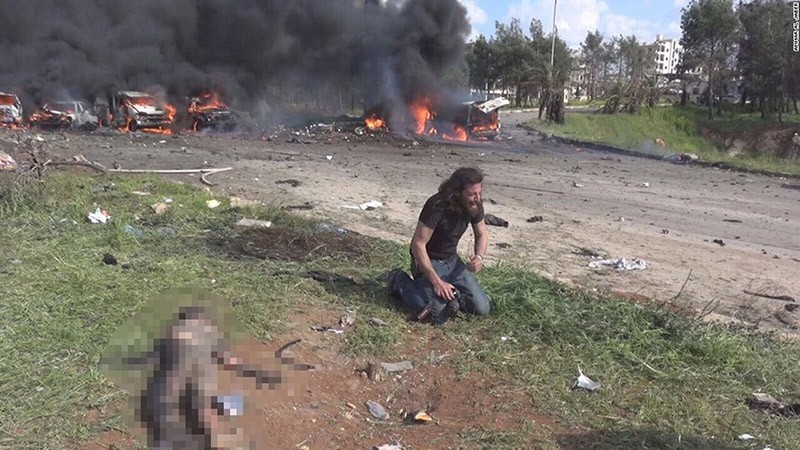 Images of photographer and activist Abd Alkader Habak picking up an injured boy rather than taking pictures have gone viral, after a bomb last week hit a convoy of buses carrying evacuees in Syria, leading to the death of 126 people.

Habak was present at site during the deadly attack and was briefly knocked out by the blast, before he decided to take action instead of taking photos and attempted to help the injured.

"The scene was horrible -- especially seeing children wailing and dying in front of you," Habak told CNN.

"So I decided along with my colleagues that we'd put our cameras aside and start rescuing injured people," he added.

According to CNN, the photographer noticed that a little boy, who was already presumed dead by others, was actually still breathing and carried him to safety, while the camera around his neck was still recording.

"This child was firmly holding my hand and looking at me," he said.

Muhammad Alrageb, another photographer in Syria, witnessed Habak's efforts and took the images of him that went viral.

Habak told CNN that he did not know if the boy, whom he left at an ambulance before helping others, survived.

Another photographer snapped images of Habak sobbing near a dead child's body, which also drew attention to the tragedy in Syria.

"I was overcome with emotion," he told CNN, trying to explain the scene. "What my colleagues and I witnessed is indescribable."

According to Britain-based Syrian Observatory for Human Rights, the bomb attack targeting a convoy of evacuees from Syria's al-Foua and Kefraya last Saturday, led to the death of at least 126 people, including more than 60 children.