Fourth round of Astana talks begin without Syrian opposition’s presence 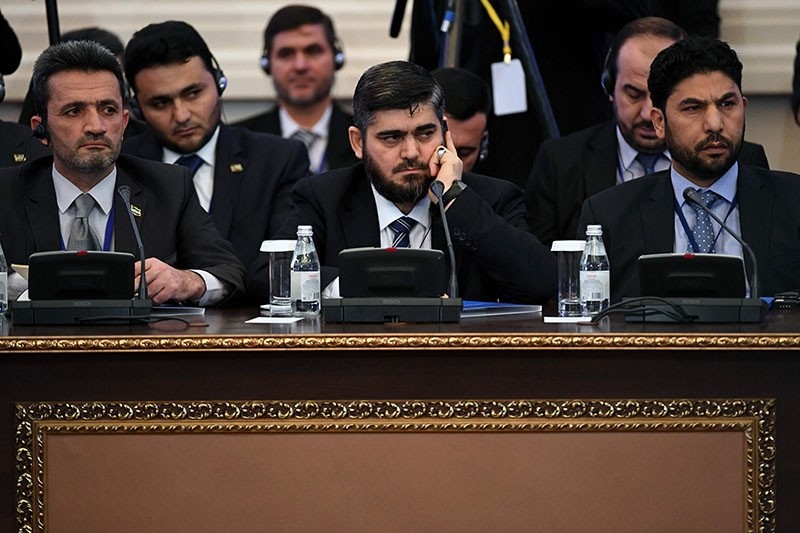 The fourth round of talks sponsored by regime backers Russia and Iran and opposition supporter Turkey opened Wednesday in Astana, the capital of Kazakhstan. For the first time, a senior State Department official of the U.S. was present in the meetings.

The Syrian opposition circulated a document that calls for the creation of "de-escalation" and security zones, to be monitored by observer countries, stating that the zones would allow for the voluntary return of refugees.

A source close to the opposition provided AFP with an Arabic-language version of a proposal drafted by Russia, which an opposition official confirmed was being discussed on Wednesday.

It calls for the creation of "de-escalation zones" in opposition-held territory in the northwestern province of Idlib, in parts of Homs province in the centre, in the south, and in the opposition enclave of Eastern Ghouta near Damascus.

The aim is to "put an immediate end to the violence" and "provide the conditions for the safe, voluntary return of refugees."

The designated zones would also see the immediate delivery of relief supplies and medical assistance.

According to the draft, "security zones" would be created around them, with checkpoints and monitoring centres to be manned by regime troops and opposition fighters.

Military units from unspecified "observer countries" could also be deployed.

The document named Turkey, Iran and Russia as guarantors of the agreement and pledged that they would create a "joint working group" within five days of the document being signed by the warring parties.

Ahmed Ramadan, an opposition representative, said the armed groups' delegation suspended their participation in the talks after presenting a 10-point document that calls for adherence to an earlier cease-fire reached in December.

Russia, an ally of the Syrian regime, also reportedly circulated a proposal, which is claimed to consist of at least four safe zones.

Russia has not officially released its proposal. Reports in Russian state media say the zones would be patrolled by forces from Russia, Iran and Turkey.

Meanwhile, President Recep Tayyip Erdoğan spoke in Ankara Wednesday, before his departure for Russia for talks with President Vladimir Putin on bilateral economic ties and the situation in Syria.

He stated that both countries aim "to stop the bloodshed as soon as possible, to protect the country's territorial unity and to find a political solution."

The meeting at Putin's Black Sea residence coincides with Syria cease-fire talks in Astana, co-sponsored by Russia and Turkey.

"The opposition delegation is suspending the meetings because of the violent airstrikes on civilians. The suspension will continue until shelling stops across all Syria," an opposition source in the Kazakh capital Astana told AFP.