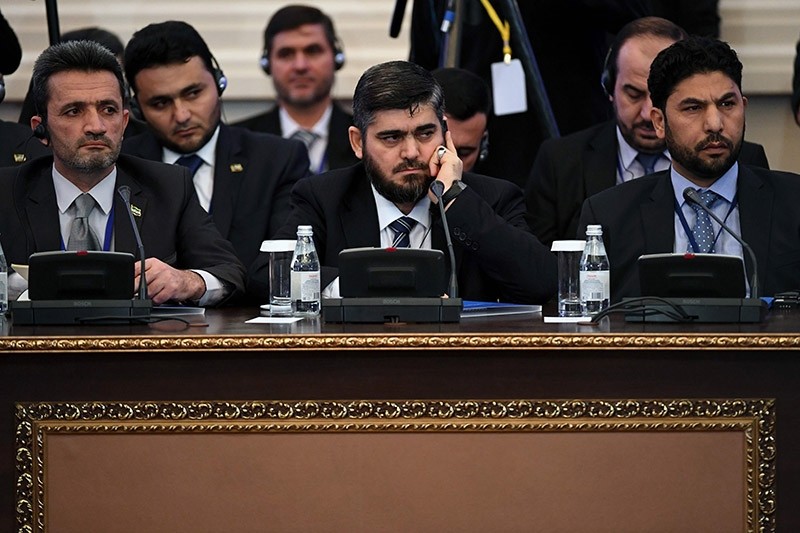 The Syrian opposition will return on Thursday to the Syrian conflict talks that are being held in the Kazakh capital of Astana after efforts by the head of Turkey's National Intelligence Organization (MİT) Hakan Fidan, President Recep Tayyip Erdoğan said Thursday.

Responding to questions after his Sochi visit, President Erdoğan said that the Syrian opposition decided to withdraw from the talks due to the continuation of bombings, however, Fidan stepped in and convinced the opposition delegation to turn back to the negotiation table.

The fourth round of talks sponsored by regime-backers Russia and Iran and opposition supporter Turkey opened Wednesday in Astana, the capital of Kazakhstan.For the first time, a senior U.S. State Department official was present in the meetings.

The Syrian opposition circulated a document that called for "de-escalation" and the creation of security zones, to be monitored by observer countries, stating that the zones would allow for the voluntary return of refugees.

A source close to the opposition provided AFP with an Arabic-language version of a proposal drafted by Russia, which an opposition official confirmed was being discussed on Wednesday.

Regarding the issue, President Erdoğan said that he hopes the creation of de-escalation zones in five Syrian regions, including Idlib, will solve 50 percent of the conflict in Syria.

Putin and Erdoğan also said Wednesday that the two leaders agreed on the establishment of de-escalation zones in Syria, which will help to maintain cease-fire in the war-torn country.

Russian negotiator Alexander Lavrentyev said that Russia hopes to negotiate a memorandum with Turkey and Iran to establish four de-escalation zones in regions where the most intensive fighting is taking place between the Assad regime forces, Jabhat al-Nusra and the moderate opposition.