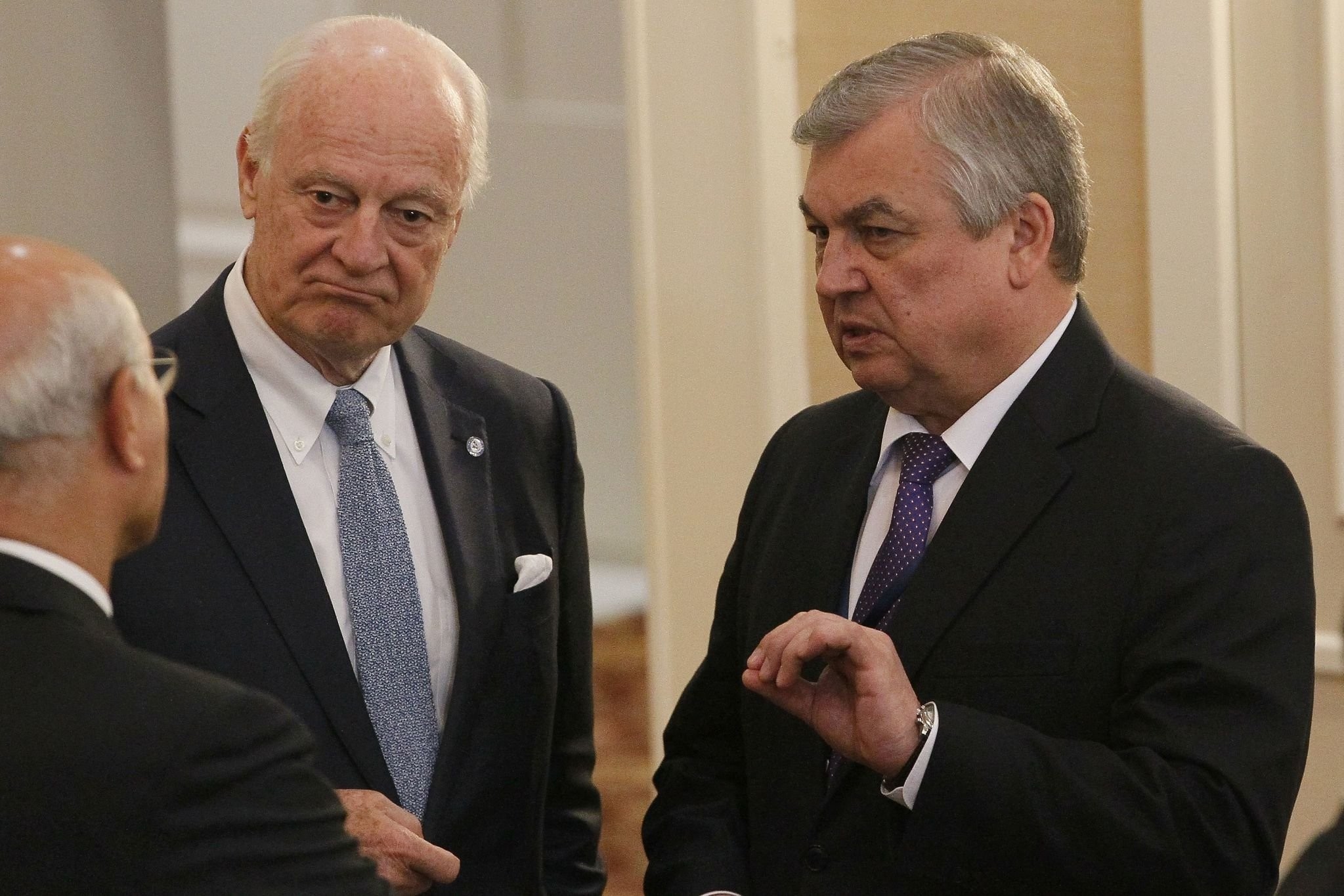 UN Special Envoy for Syria Staffan de Mistura (L) and Russian mediator Alexander Lavrentiev attend the fourth round of Syria peace talks in Astana on May 4, 2017. (AFP Photo)
by Daily Sabah with Agencies May 04, 2017 12:00 am

Guarantor states Turkey, Russia and Iran have agreed to sign a memorandum on creating de-escalation zones in Syria, Kazakh Foreign Minister Abdrakhmanov said Thursday while the delegation of Syrian opposition protested Iran's participation at the conference, accusing it of being a party in the war that has killed some 400,000 people.

Abdrakhmanov said that guarantor states once again guaranteed the territorial integrity of Syria, adding that next Syria peace talks would be held in Astana in mid-July.

"Syrian crisis should be solved via a political solution under the auspices of United Nations," he said.

Turkey's Foreign Ministry released a statement yesterday welcoming the decision on the establishment of the de-escalation zones, adding that all of Idlib, parts of Aleppo, Latakia and Homs, Damascus / Eastern Ghouta area and parts of Daraa and Quneitra are included in the zones inside Syria.

"We welcome this memorandum on stopping the use of all kinds of weapons, including air elements, between the conflicting parties (in conflict-free zones) and ensuring the flow of urgent and uninterrupted humanitarian aid to the region," the statement read.

Responding to questions after his Sochi visit, President Erdoğan said that the Syrian opposition decided to withdraw from the talks due to the continuation of bombings, however, Fidan stepped in and convinced the opposition delegation to turn back to the negotiation table.

Regarding the de-escalation zones, President Erdoğan said that he hopes the creation the zones in five Syrian regions, including Idlib, will solve 50 percent of the conflict in Syria.

Putin and Erdoğan also said yesterday that the two leaders agreed on the establishment of de-escalation zones in Syria, which will help to maintain cease-fire in the war-torn country.

Meanwhile, Russian negotiator Alexander Lavrentyev said Russia hopes to negotiate a memorandum with Turkey and Iran in order to establish four de-escalation zones in regions where the most intensive battles are taking place between the Assad regime forces, Jabhat al-Nusra, and the moderate opposition.

Russian Foreign Minister Sergei Lavrov also said yesterday that the establishing of these zones in Syria should serve as a key step toward consolidating a nationwide cease-fire, the Russian daily, Sputnik reported.

Turkey and Russia have played key roles in stopping the bloodshed in Syria by agreeing on the evacuation of Aleppo last December. Putin described the evacuation as "the biggest humanitarian operation in the world," and subsequently established a nationwide cease-fire in the war-torn country.

Along with Iran, the two countries also took the initiative to bring together the Assad regime and the Syrian opposition in Astana to sustain a cease-fire agreement and negotiate a political transition.

President Erdoğan will now be meeting U.S. President Donald Trump on May 16, where the Syrian issue will be among the major topics on the agenda.

The relation between Ankara and Washington has soured as Turkey opposed the U.S. partnership with the Syrian Democratic Forces (SDF), which is predominantly controlled by the PKK's Syrian offshoot the YPG.