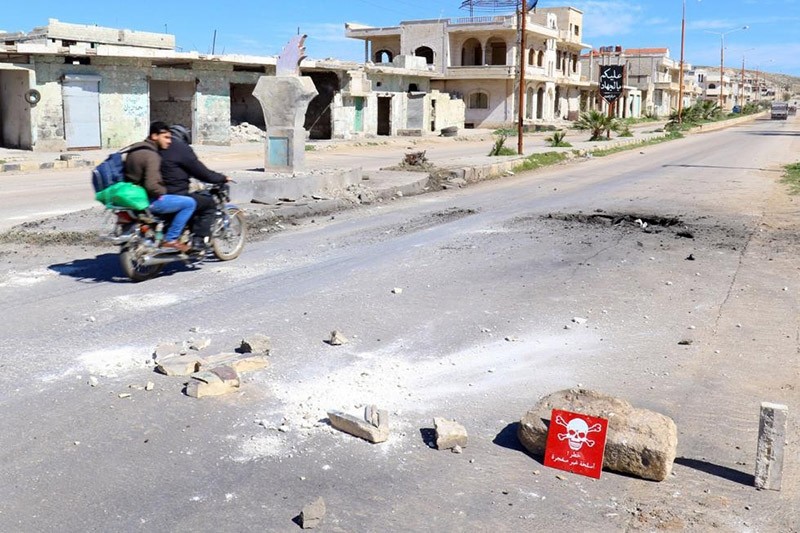 A Western intelligence source claims that it has proof of the ongoing production of chemical weapons in Syria —contrary to an agreement from 2013— a BBC report published Thursday says. According to the unnamed source, chemical and biological munitions are produced at sites near Damascus and Hama.

The intelligence document at the heart of the BBC's disclosure reports that there are three manufacturing sites, listed as the Masyaf facility in Hama and the Barzeh and Dummar (Jamrayah) facilities close to Damascus. All of them are said to be part of the Scientific Studies and Research Centre (SSRC), an institution run by the Assad regime, but promoted as a civilian research institute. The Masyaf and Barzeh facilities are said to specialize in the production of chemical weapons for long-range missiles and artillery. The BBC was allowed to publish the information only on condition that it did not name the source, the BBC report said.

In 2013, Assad was pushed to formally give up on his chemical weapons program and dismantle existing stocks after allegedly carrying out a chemical attack on Ghouta, an area close to Damascus, in the course of clashes with opposition forces. Russian Foreign Minister Sergei Lavrov and U.S. Secretary of State John Kerry struck a deal in September 2013, according to which the arsenal of chemical weapons should be removed or destroyed, in exchange for a layoff of U.S. airstrikes against the Assad regime. Syria's Assad as a consequence also had to sign up to the Chemical Weapons Convention (CWC). The current document referred to by the BBC report charges that both Iran and Russia as Syria's allies are aware of ongoing weapons productions in regime-held areas of Syria.

Current allegations would imply that the Assad regime must have found a way around the monitoring of production sites, which is conducted on a regular basis by the Organization for the Prohibition of Chemical Weapons (OPCW). The OPCW itself says in a recent report that inspectors visited the Barzah and Jamrayah facilities outside Damascus on an inspection trip from Feb. 26 to March 5, 2017, but that the OPCW was still waiting for the analysis results of samples collected at the sites and sent in to OPCW laboratories. The OPCW also asked Syrian authorities to "declare the relevant parts" of the SSRC cites, according to an email sent to the BBC, as past declarations were not yet considered sufficient.

While not all information at hand is conclusive yet as to the production of chemical warfare agents, recent events point to the use of sarin gas or related substances by the Assad regime, making it likely that the regime still holds a stockpile of chemical weapons. Assad himself refuted the accusations, saying that they are 'fabrications" and that he had given up his chemical weapons arsenal in 2013.

In the course of an attack on the opposition-held town of Khan Sheikhoun which occurred April 4, at least 87 civilians were reported to have died with symptoms of chemical poisoning. While explanations differ as to the exact nature and the origin of the chemical agent, the OPCW said that, according to extensive testing, the substance must have been sarin or a chemically similar, equally banned substance.

Western powers argue that a chemical attack was carried out by the Assad regime and refute the Russian version, claiming that the agent was released when regime forces struck an opposition-held warehouse storing the chemicals, as unlikely. While Daesh has used poisonous substances before, it typically deploys mustard gas, as its abilities to produce chemical weapons are very rudimentary according to the Pentagon, which would rule out the use of substances like Sarin, which require more sophisticated procedures. The United Nations suggested that the agent used in the Khan Sheikhoun attacks is basically the same as that reportedly used in a dramatic chemical attack on Ghouta in 2013, which resulted in a high number of casualties, a circumstance also pointing into the direction of the Assad regime as culprit.