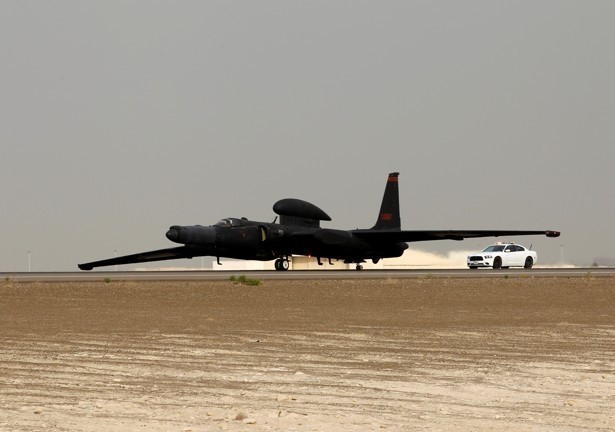 A U.S. Air Force U-2 Dragon Lady from 380th Air Expeditionary Wing lands at an undisclosed location in the Middle East after a mission in support of Operation Inherent Resolve on March 13. Reuters Photo
by Daily Sabah May 18, 2017 12:00 am

The strike took place after the convoy violated a de-confliction zone near the Jordanian border.

"A convoy going down the road didn't respond to numerous ways for it to be warned off from getting too close to coalition forces in al-Tanf," a Pentagon official said.

As the convoy failed to respond, the U.S. forces conducted a strike, "against the lead portion of that movement."

The area around al-Tanf has been a source of tensions as both Syrian regime forces and U.S.-backed rebels advance there trying to rout Daesh terrorist group from the region.

In April, Daesh attacked the al-Tanf army base, where the U.S. Special Forces train Syrian fighters.

Later in the day, a tweet from the official account of Combined Joint Task Force - Operation Inherent Resolve (CJTF-OIR) was shared.

In the tweet, it was stated that the strike was carried out because the pro-Assad forces in the region "posed a threat" to US partner forces.

"This was despite Russian attempts to dissuade pro-regime movement towards At Tanf, Coalition aircraft show of force and warning shots," the US-led coalition said in a follow-up tweet.