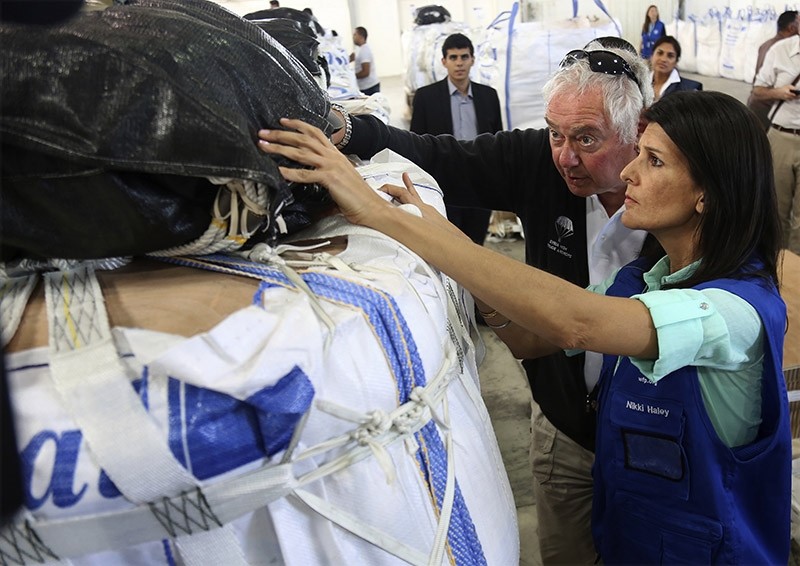 U.S. Ambassador to the United Nations Nikki Haley, inspects a food pallet to be air-dropped deep inside Syria, in Amman (AP Photo)
by Associated Press May 22, 2017 12:00 am

His skull and jaw wrapped in bandages, the young Syrian refugee stared nonchalantly into a small black box at a supermarket in this sprawling, dust-swept refugee camp. The box scanned his iris to identify him, charged his account and sent him on his way.

If the boy noticed U.S. Ambassador to the United Nations Nikki Haley watching intently from just a few feet away, he didn't show it. But Haley would later tout the iris-scanners as a fraud-cutting tool boosting efficiency for the more than $6.5 billion the U.S. has spent helping those whose lives have been upended by Syria's harrowing civil war.

Yet as Haley pledged Sunday that the U.S. would increase support, her message was diluted by Trump's own vow to put "America First," his planned budget cuts and hardline position on admitting refugees.

"We're the No. 1 donor here through this crisis. That's not going to stop. We're not going to stop funding this," Haley said. "The fact that I'm here shows we want to see what else needs to be done."

It was a theme the outspoken ambassador returned to over and over in Jordan at the start of her first trip abroad since taking office. In her stops here and in Turkey — another Syria neighbor — Haley is witnessing first-hand the strains placed on countries absorbing the more than 5 million Syrians who have fled the Daesh terrorist group, the Assad regime, or both.

She climbed into the trailer of an 18-wheeler staged at the Ramtha border crossing less than a kilometer (0.6 miles) from Syria, inspecting boxes of peas, tuna and canned meat stacked shoulder-high. The truck was to join 19 others in a convoy into opposition-held territory in Syria, carrying supplies from U.N. agencies and other groups, many U.S.-funded.

"This is all in the name of our Syrian brothers and sisters," Haley told aid workers in a nearby tent, swatting away flies in the summer heat. "We want you to feel like the U.S. is behind you."

The U.S. president's message to Syrians couldn't be more different.

Trump, who was in Saudi Arabia on his first overseas trip, once called his predecessor "insane" for letting in Syrian refugees. As president, he tried to bar them from the U.S., describing them as a national security threat. A court blocked that move, but the number of Syrian refugees admitted has nonetheless dropped, from 5,422 in the four months before Trump's inauguration to 1,566 in the four months since, U.S. statistics show.

And Trump has called for drastic cuts to U.S. funding for the United Nations and its affiliated agencies — such as those aiding people still in Syria and those who've fled. Trump plans to release his budget blueprint Tuesday, but his initial proposal in March called for a one-third cut to diplomatic and overseas programming while boosting the U.S. military by $54 billion.

Haley told reporters accompanying her to Jordan that the U.S. was "not pulling back" and was in fact "engaging more." She cited Trump's stepped-up action to try to hasten a political solution to the war, including a strike punishing Assad's forces for using chemical weapons that the Syrian opposition and its backers have enthusiastically applauded.

She echoed Trump's defense of his plan to temporarily halt refugee admissions from all countries — which was also blocked in court — by saying the U.S. needed to protect Americans by first improving its refugee-vetting capabilities. And she pointed to a group of women in the camp who'd overwhelmingly told her their hope was to return to Syria, not relocate to the U.S.

"So our goal is how do we get these people back home to a safe place?" Haley said.

Still, the situation in Zaatari Refugee Camp — like in others in Jordan, Turkey, Lebanon and Iraq — tell the story of Syrians who see no quick resolution to their plight.

In Zaatari, half of the 80,000 refugees are children, and a dozen babies are born here per day, according to UNICEF, the U.N.'s child welfare agency. Thirty-five percent of marriages involve a child under 18, a reflection of the economic hardships families in the camp face.

Many of the younger children wander unsupervised through the camp, where gusts of dust occasionally reduced visibility to just a few feet as Haley's motorcade rolled through the streets, passing sparse, white-corrugated buildings accorded a bit of cheer by colorful murals painted on their walls.

As ambassador, Haley plays a key but only partial role in the Trump administration's decision-making on Syria, refugees and humanitarian aid. But her role at the U.N. puts her at the center of the debate about how the global community takes on the crisis. After all, it's successive U.N. Security Council resolutions that created the legal framework for aid groups to send aid into Syria, with or without Assad's consent.

At the Marka military airport in Amman, Haley went aboard a cargo plane to get a rare look at high-risk operations to airdrop wheat, lentils and cooking oil into Assad-controlled territory in Deir ez-Zour, which is completely surrounded by the Islamic State group. In a sign of Moscow's outsize influence in the Syria conflict, both the aircraft and the company that flies it on behalf of the World Food Program are Russian.

"It's smiles, and tears," said David Beasley, WFP's executive director. "It really is."