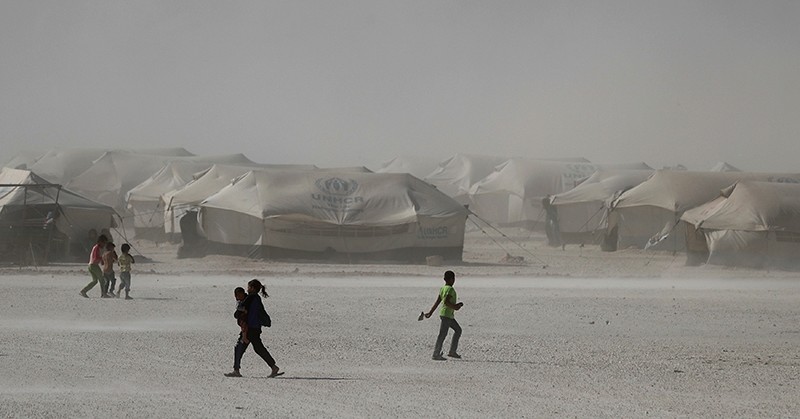 Children walk at a camp for people displaced from fighting in the Islamic State stronghold of Raqqa, in Ain Issa, Syria June 14, 2017 (Reuters Photo)
by Associated Press Jun 14, 2017 12:00 am

At least 300 civilians have been killed, and 160,000 displaced amid the intensified airstrikes by the U.S.-led anti-Daesh coalition against Syria's northern city of Raqqa, a UN commission said Wednesday.

"We note in particular that the intensification of airstrikes, which have paved the ground for an SDF - Syrian Democratic Forces - advance in Raqqa, has resulted not only in staggering loss of civilian life, but has also led to 160,000 civilians fleeing their homes and becoming internally displaced," chairman of the UN's Independent International Commission of Inquiry on Syria, Paulo Sergio Pinheiro said.

Speaking at the 35th Session of the UN Human Rights Council in Geneva, Pinheiro said that more than 600,000 people remained trapped in besieged areas across Syria.

"The prolonged and deliberate denial of humanitarian aid continues to cause severe shortages of food and basic necessities," he said.

The chairman also added that the de-escalation zones agreed by guarantors Russia, Iran and Turkey during the fourth round of the Astana talks on May 4 had resulted in a "discernible reduction in levels of violence in the zones around Idlib and western Aleppo".

Following the Council's session on Syria, Commissioner Karen Koning AbuZayd told reporters that the Raqqa airstrikes had left about 300 civilians dead, with 200 of them having been killed in the village of al-Mansoura.

Last Friday, the U.S.-backed SDF, which contains numerous elements linked to the terrorist PKK/PYD group, called on Daesh militants in Raqqa to surrender by the end of June.

Since then, air and artillery attacks on the city -- by the U.S.-led coalition and the SDF respectively -- have intensified, resulting in scores of civilian casualties.