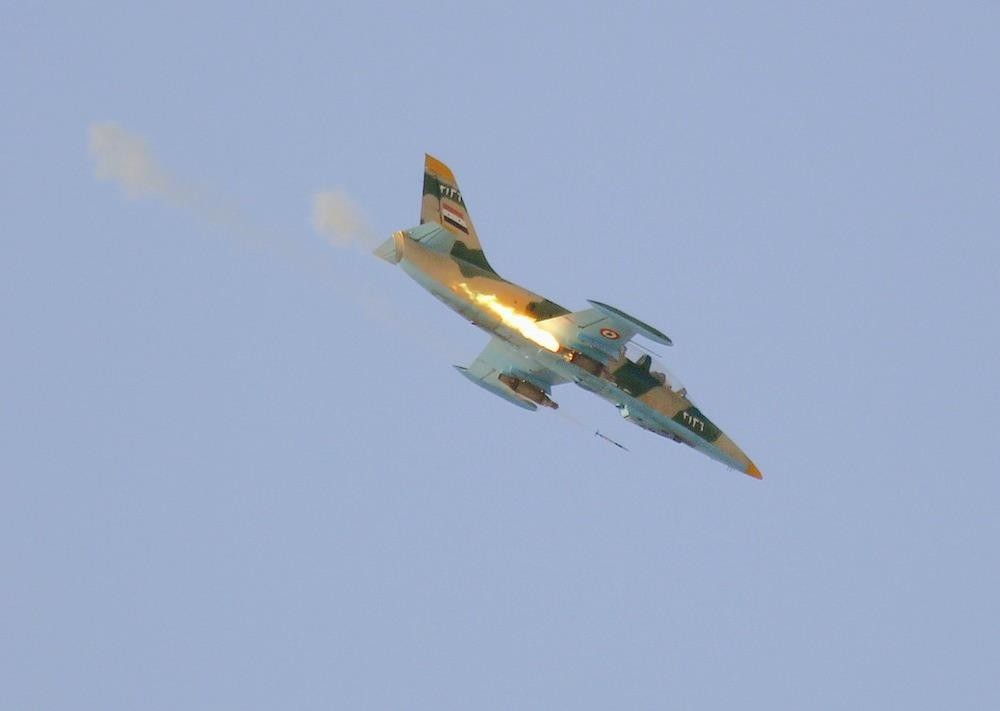 The U.S.-led coalition said in a statement late Sunday that it downed a Syrian warplane in Tabqah in order to protect Syrian Democratic Forces (SDF) fighters, the majority of whom are the People's Protection Units (YPG) militants, the PKK terror organization's Syrian affiliate.

"At approximately 4:30 p.m. Syria time, June 18, pro-Syrian regime forces attacked the Syrian Democratic Forces-held town of Ja'Din, South of Tabqah, wounding a number of SDF fighters and driving the SDF from the town. Coalition aircraft conducted a show of force and stopped the initial pro-regime advance toward the SDF-controlled town," the coalition said in the statement.

"Following the pro-Syrian forces attack, the Coalition contacted its Russian counterparts by telephone," the Coalition added, using an "established de-confliction line" to de-escalate the situation and stop the firing.

"At 6:43 p.m., a Syrian regime SU-22 dropped bombs near SDF fighters south of Tabqah and, in accordance with rules of engagement and in collective self-defense of Coalition partnered forces, was immediately shot down by a U.S. F/A-18E Super Hornet."

"The Coalition's mission is to defeat Daesh in Iraq and Syria. The Coalition does not seek to fight the Syrian regime, Russian, or pro-regime forces partnered with them, but will not hesitate to defend the Coalition or partner forces from any threat," the Coalition said.

"The Coalition presence in Syria addresses the imminent threat Daesh in Syria poses globally. The demonstrated hostile intent and actions of pro-regime forces toward the Coalition and partner forces in Syria conducting legitimate counter-Daesh operations will not be tolerated. The Coalition calls on all parties to focus their efforts on the defeat of Daesh, which is our common enemy and the greatest threat to regional and worldwide peace and security."

U.S. support for the SDF has caused tension in the relationship between Washington and Ankara, as the YPG forms the backbone of the SDF. The U.S. claims that it supports the SDF, despite the group being predominantly led by the YPG and says that supporting the SDF is the only option for defeating Daesh while Ankara says an alternative would be to work with local Arab tribes backed by countries in the region instead of supporting what it calls a "terrorist group." Turkey argues that the support given to the YPG in Syria is ultimately transferred to the PKK, and then used against its citizens. The PKK is recognized as a terror group by both the U.S. and the EU.

Lavrov also said that a new round of peace talks on Syria in Kazakhstan's capital Astana would take place on July 10.

Meanwhile, a top Russian diplomat also has condemned the U.S. for shooting down a Syrian Air Force fighter jet the previous day as an act of "aggression." Russian Deputy Foreign Minister Sergei Ryabkov told Russian news agencies yesterday that the downing was akin to "helping the terrorists that the U.S. is fighting against."