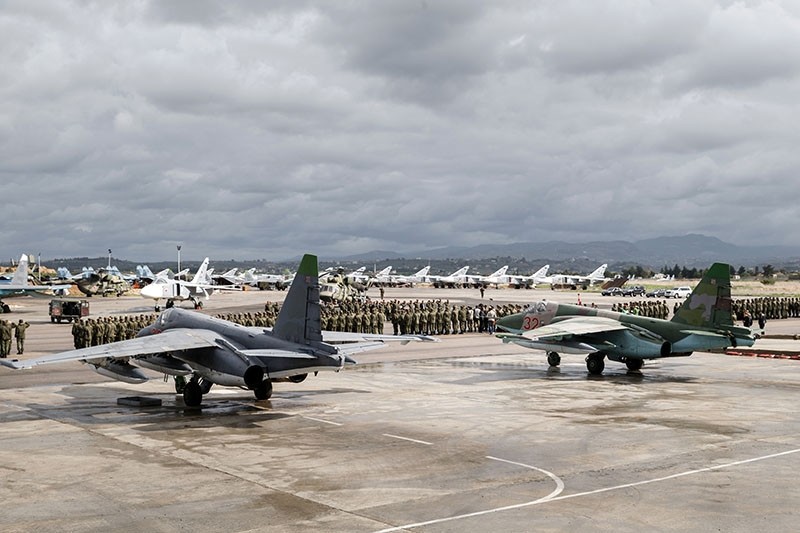 In this file photo, a lineup of Russian troops is held before withdrawal at Hemeimeem Airbase in Syria, March 15, 2016. (Vadim Grishankin/Russian Defense Ministry Press Service via AP)
by Associated Press Jun 19, 2017 12:00 am

The tensions between the two superpowers were strained once again with Sunday's downing of a regime fighter jet by U.S.-led coalition in Syria as Russia said Monday it will treat U.S.-led coalition planes in Syria, west of the Euphrates, as targets.

The Russian defense ministry says in a statement that, starting Monday, it will track all jets and drones of the U.S.-led coalition west of the Euphrates and treat them as targets.

The ministry also called on the U.S. military to provide a full account of why it decided to shoot down the Syrian SU-22.

It also said it is suspending coordination with the United States in Syria over so-called "de-confliction zones."

The ministry accused the U.S. of failing to use a pre-established communication channel to warn Moscow of a strike downing the warplane, announcing it would drop the use of this channel.

"The command of the coalition forces did not use the established communication channel for preventing incidents in Syrian airspace," it said, adding Moscow "ends cooperation (regarding the channel) with the American side from June 19."

The United States and Russia, which has been providing an air cover for Bashar Assad since 2015 in his offensive against the Daesh group, have a standing agreement that should prevent in-the-air incidents involving U.S. and Russia jets engaged in operations in Syria.

A top Russian diplomat has condemned the United States for shooting the fighter as an act of "aggression."

The U.S. military confirmed a U.S. F-18 Super Hornet shot down Sunday a Syrian SU-22 after it dropped bombs near the U.S. partner forces, known as the Syrian Democratic Forces (SDF), aligned with the Americans in the fight against the Daesh group.

Russian Deputy Foreign Minister Sergei Ryabkov told Russian news agencies on Monday that the downing was akin to "helping the terrorists that the U.S. is fighting against."

Ryabkov asks: "What is this, if not an act of aggression?"

Viktor Ozerov, chairman of the defense and security committee at the upper chamber of Russian parliament, described the Defense Ministry's statement as a warning.

"I'm sure that because of this neither the U.S. nor anyone else will take any actions to threaten our aircraft," he told the state-owned RIA Novosti news agency. "That's why there's no threat of direct confrontation between Russia and American aircraft."

Ozerov insisted that Russia will be tracking the coalition's jets, not shooting them down, but he added that "a threat for those jets may appear only if they take action that pose a threat to Russian aircraft."