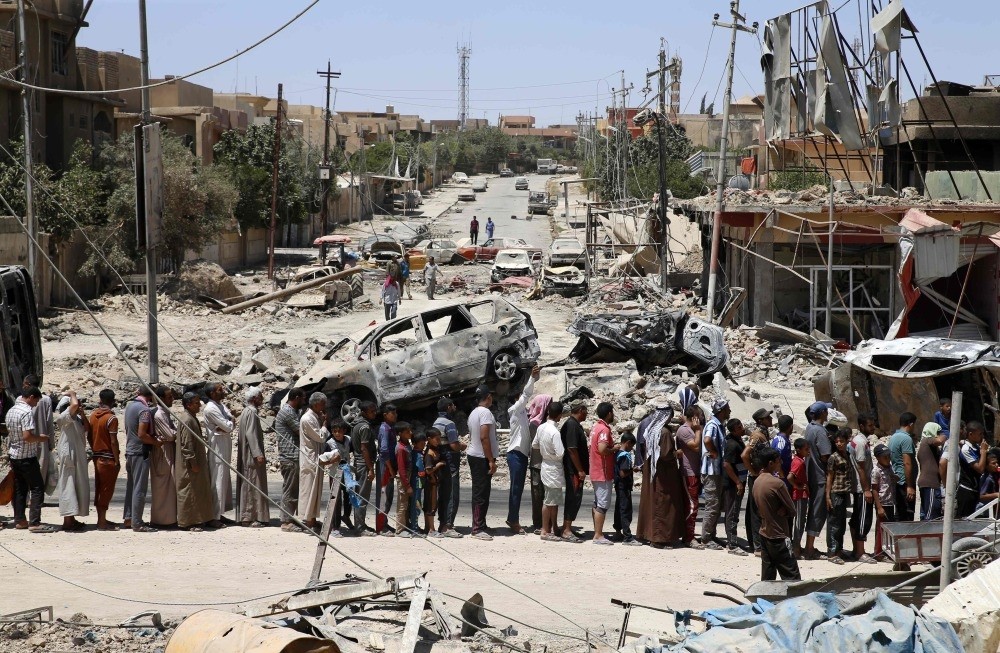 Syrians walk along a severely damaged road in the northeastern city of Deir ez-Zor.
by Compiled from Wire Services Jun 22, 2017 12:00 am

A polio outbreak in war-ravaged Syria has left at least 17 children paralyzed since March, according to WHO officials who describe the situation as ‘very serious'

Seventeen new cases of polio have been confirmed in Syria, including a child who may have contracted the disease in Raqqa, the World Health Organization said on Tuesday. The WHO reported two polio cases in a partly Daesh-held area in Syria earlier this month, the first reported case of the virus' reemergence in the war-torn country since 2014, striking a major blow to hopes of eradicating the disease globally.

"This is deeply troubling because a single case of polio that has paralyzed a child makes this an outbreak," WHO spokesman Tarim Jasarevic told reporters in Geneva. He stressed that for every one case of polio-caused paralysis, there is, on average, 200 children who have the virus but do not show symptoms. "The virus is circulating. It is very serious," Jasarevic added.

The spokesman said the WHO is conducting health assessments to ascertain whether the virus is circulating in Raqqa or if the polio victim had travelled to Raqqa after contracting the virus elsewhere.

In a U.N. briefing Tuesday, Jasarevic said 14 additional cases have been reported in the same area, located in the Mayadin district of Deir al-Zor province, while another case was reported in Raqqa, a city where Daesh fighters are trying to resist a U.S.-backed assault.

The 17 children who have been paralyzed first reported symptoms between March 3 and May 23. Confirming the presence of the virus takes between six and eight weeks according to doctors, meaning the outbreak could spread before its extent is known. The WHO plans to vaccinate 320,000 children under the age of five in Deir al-Zor and 90,000 in Mayadin, according to the spokesman.

The Oral Polio Vaccine (OPV) replicates in the gut and can be passed to others through water contaminated with feces - meaning the vaccinated child would not be exposed but neighbors with poor hygiene and low immune systems would be at risk of exposure.

"Our teams on the ground are currently looking into the logistics," WHO spokesman Oliver Rosenbauer told the AFP. "We still don't know how we will get the vaccine in. …Either by truck or helicopter," he added. Tensions between the Assad regime and the U.S. coalition escalated last Sunday as the U.S. military brought down a jet near Raqqa for bombing an area close to U.S.-allied forces on the ground and Iran launched missiles at Daesh targets in eastern Syria - the first time each state has carried out such actions in the multi-sided Syrian war. The missiles flew over Iraq before striking what the Guardian referred to as a Daesh command center and suicide car bomb operation in Deir el-Zour, over 600 kilometers (370 miles) away.