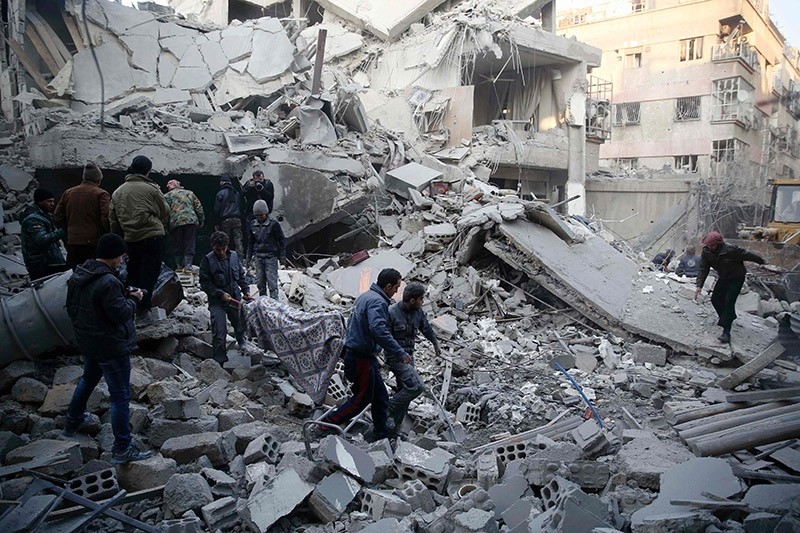 Syrians and civil defence workers evacuate victims from the rubble of a destroyed building following air strikes on the Eastern Ghouta town of Douma, a rebel stronghold east of the capital Damascus, on January 10, 2016. (AFP Photo)
by Anadolu Agency Jul 04, 2017 12:00 am

Assad regime warplanes on Tuesday struck the city of Douma east of capital Damascus, which lies within one of several so-called de-escalation zones, according to a pro-opposition Syrian civil defense official.

According to al-Halli, one woman and one child were killed in the attack, while an unspecified number of other civilians were injured.

For the last five years, Douma -- home to some 200,000 people -- has remained under siege by foreign terrorist groups allied with the Assad regime.

During peace talks held in Astana in early May, Douma was designated as part of a network of de-escalation zones in which acts of aggression are expressly forbidden.

On Tuesday, a fifth round of peace talks kicked off in the Kazakh capital.

A first round of peace talks was held in Astana on Jan. 23 and 24 after a ceasefire was reached on Dec. 30.

Syria has been locked in a vicious civil war since early 2011, when the regime cracked down on pro-democracy protests with unexpected ferocity.

Since then, hundreds of thousands of people have been killed in the conflict and more than 10 million displaced, according to U.N. officials.