Fifth round of Syria talks begins in Kazakhstan's Astana 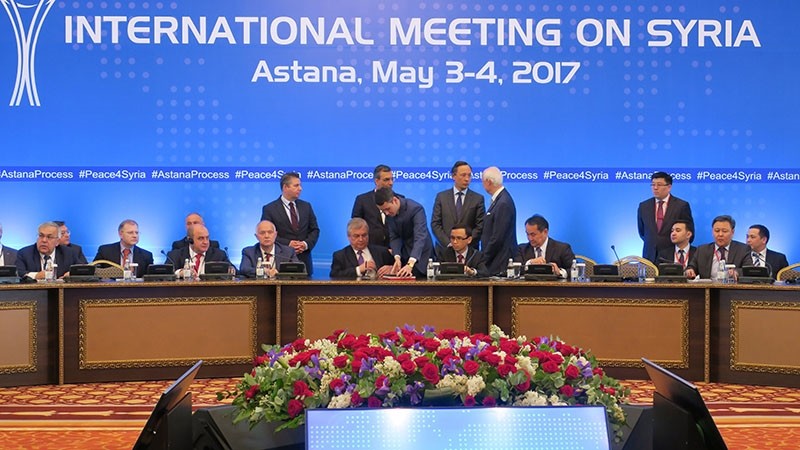 This file photo dated May 4, 2017, shows delegates attending to the third round of Syria talks in Astana, Kazakhstan. (AA Photo)
by Compiled from Wire Services Jul 04, 2017 12:00 am

A fifth round of talks on ending the six-year Syrian conflict began in Kazakhstan on Tuesday, focused on shoring up a plan for safe zones in the war-torn country.

"All the delegations that plan to participate in this important stage of the talks have arrived," Kazakh Foreign Minister Kairat Abdrakhmanov was quoted as saying by national news agency Kazinform.

Beside the three guarantor countries -- Russia, Turkey, and Iran -- and UN Special Representative for Syria Staffan de Mistura, delegations from Jordan and the U.S. will also attend the talks as observers.

Abdrakhmanov said agenda items include the creation of de-escalation zones in Syria, which was signed by the guarantor countries during a meeting in Astana on May 4.

The two days of meetings are then set to involve a string of bilateral talks before a plenary session bringing together all the participants on Wednesday.

An agreement signed by regime backers Moscow and Tehran and opposition-backer Ankara to carve out four "de-escalation zones" in Syria was seen as a potential breakthrough towards calming a conflict that has claimed an estimated 320,000 lives.

The deal laid out the areas where opposition and regime forces should halt hostilities, including air strikes, for six months. More than 2.5 million people are believed to live in the zones.

Violence decreased markedly across all four areas in the first weeks after the deal was announced, although it ramped up in Daraa.

However, the sides failed to meet a June 4 deadline to determine the exact boundaries of the zones and it remains unclear how and by whom they will be policed.

The Astana talks received a boost on Monday after the regime forces unilaterally announced a halt to fighting until midnight on July 6 in the southern provinces of Daraa, Quneitra and Sweida, which cover the rough area of one of the four proposed zones.

Of all the four zones, which also take in the northwestern province of Idlib, parts of the central province of Homs and opposition-controlled Eastern Ghouta near Damascus, it is the southern zone that has seen the worst fighting in recent weeks.

While Damascus has spoken in support of the zones deal, the rebels have been far more pessimistic and slammed any Iranian involvement in the plan.

Russia has argued the agreement will help focus attacks against militant groups such as Fateh al-Sham, previously known as the Nusra Front, and the Daesh terrorist, which are not parties to the troubled government-opposition truce.

Syria's conflict evolved from a bloody crackdown on protests in 2011 to a devastating war that has drawn in world powers, including Russia and a U.S.-led international coalition. Since then, more than 250,000 people have been killed and in excess of 10 million displaced, according to the UN.

Russia has pushed the talks in Astana since the start of the year as it seeks to pacify Syria after it game-changing military intervention on the side of Assad.

The talks in Astana complement broader political negotiations the United Nations is backing in Geneva that are due to restart in mid-July.