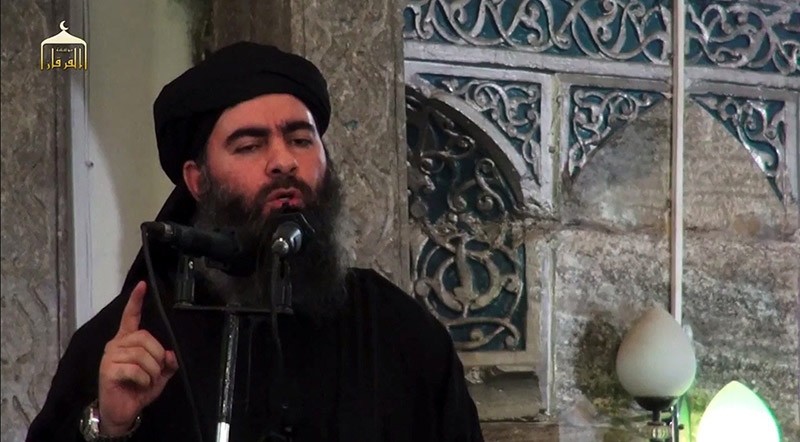 An image grab taken from a propaganda video released on July 5, 2014 by Al-Furqan Media allegedly shows the leader of the Daesh terror group Abu Bakr al-Baghdadi. (AFP Photo)
by Jul 11, 2017 12:00 am

The Syrian Observatory for Human Rights told Reuters on Tuesday that it had "confirmed information" that Daesh leader Abu Bakr al-Baghdadi has been killed.

Russia's defense ministry said it may have killed Baghdadi when one of its air strikes hit a gathering of Daesh commanders on the outskirts of the Syrian city of Raqqa, but Washington said it could not corroborate the death and Western and Iraqi officials have been skeptical.

"(We have) confirmed information from leaders, including one of the first rank, in the Daesh in the eastern countryside of Deir al-Zor," the director of the British-based war monitoring group Rami Abdulrahman told Reuters.

Baghdadi's death had been announced many times before but the Observatory has a track record of credible reporting on Syria's civil war.

Abdulrahman said Observatory sources in Syria's eastern town of Deir al-Zor had been told byDaesh sources that Baghdadi had died "but they did not specify when".

Iraqi and Kurdish officials did not confirm his death. The U.S. Department of Defense said it had no immediate information corroborate Baghdadi's death.

Daesh-affiliated websites and social media feeds have not carried any news regarding the leader's possible death.

Baghdadi's death, which has been frequently reported since he declared a caliphate from a mosque in the Iraqi city of Mosul in 2014, is one of the biggest blows yet to the terror group, which is trying to defend shrinking territory in Syria and Iraq.