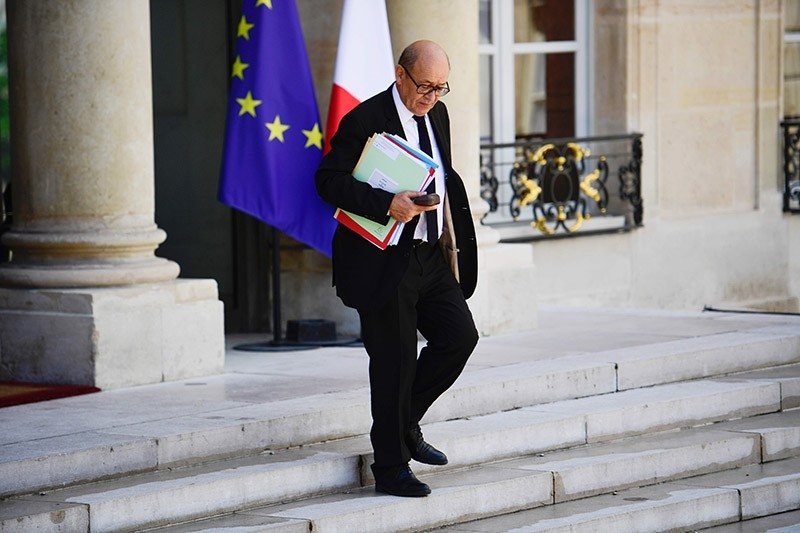 France wants major powers involved in the Syrian crisis to join a contact group that would make proposals to warring parties, in an effort to break a deadlock in political negotiations, the French foreign minister said.

Emmanuel Macron's election victory has given Paris a chance to re-examine its policy on Syria. The change being proposed is to drop demands that Bashar al-Assad step down as a pre-condition for talks, although French officials still insist he cannot be the long-term future for Syria.

France now appears to be aligning its foreign policy with the U.S. priorities of fighting terrorism and seeking better ties with Russia, a move that it calculates could give it a role as a go-between between the two powers, especially on Syria.

"This initiative presumes that we don't set a pre-condition to the talks that Bashar al-Assad must leave," Jean-Yves le Drian told CNews in an interview carried Wednesday on its website. That should encourage Russia to enter the process, he said.

Le Drian gave no details on what new proposals might be offered, a potential format for the contact group or how it would affect existing peace efforts under the auspices of the United Nations, which have limped on for several years with no visible progress.

The foreign ministry and president's office did not respond to questions on the initiative.

Macron has said he hoped that such a group would comprise the five permanent members of the Security Council, including Britain, China, France, Russia and the United States, regional powers and opposition and Assad regime officials.

A Middle Eastern diplomat said the U.S. President Donald Trump had agreed in principle to the idea during last week's visit to Paris, although he wanted the group to comprise only the Security Council members.

Macron, a centrist elected in May, said in June he no longer considered Assad's departure a pre-condition for a negotiated settlement to the conflict, which has killed hundreds of thousands of people and driven more than 11 million from their homes.

Speaking to reporters in Geneva on Wednesday, Russia's ambassador Alexei Borodavkin said Moscow saw this as a positive development.

"What is important I think is that this initiative is also based on the assumption which was announced by President Macron that France is no longer demanding that Assad should immediately resign," he said.

The French idea of a contact group has already been broached to some of the potential parties, although several French diplomats said it the idea was still vague.

Steffan de Mistura, the UN mediator for the Syria talks now being conducted, commented on the proposal in Geneva last Friday, after the seventh round of those talks in Geneva .

"In fact the UN would be in a position therefore of doing what we're doing at the moment but with one difference, that you would have those countries who are actually very influential, being in a position also perhaps influencing directly during the talks," de Mistura said. "Should I be against that? That's exactly what the UN needs to have and wants to have."