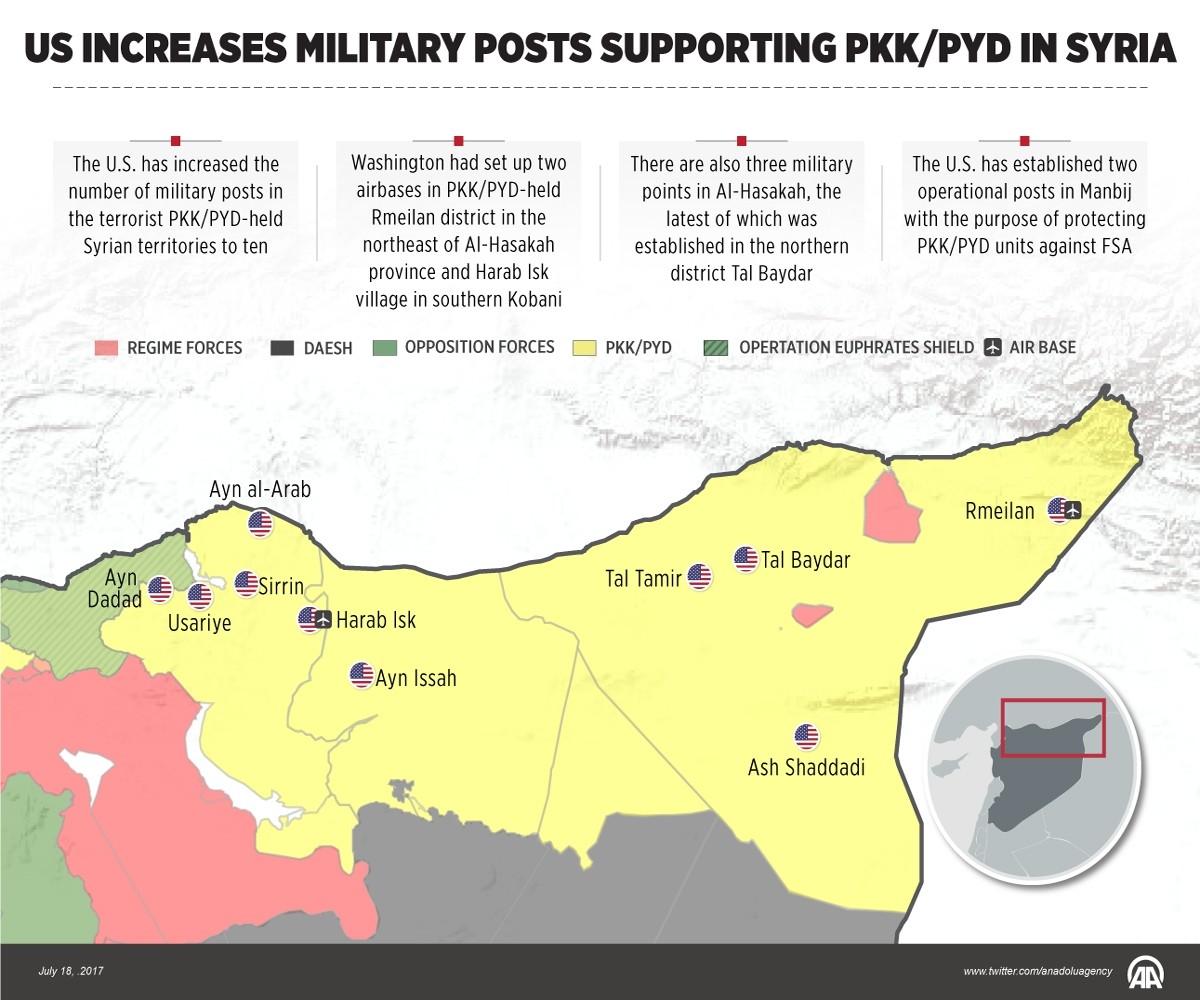 Ankara-based wire service Anadolu Agency has revealed that U.S. has increased the number of military posts in Syrian controlled by PYD terrorists to ten.

According to the outlet's reporters, a U.S. military point has recently been established in PYD-held areas in northern Syria.

PYD is the Syrian affiliate of PKK, a militant group recognized as a terrorist group by US, EU, Turkey and many other countries.

Washington had set up two airbases in PYD-held Rmeilan district in the northeast of Al-Hasakah province in October 2015 and Harab Isk village in southern Kobani in March 2016.

While the Rmeilan airbase is large enough for cargo planes to land, Harab Isk base is only used by military helicopters.

While a part of the U.S. military aid to PKK/PYD goes through Iraqi border by land, the other part is shipped to the region through the Rmeilan airbase.

These "field-type" military points are usually hidden for security reasons, making it hard to be detected, according to Anadolu Agency reporters.

Apart from the military points, the U.S. also uses some other places which are hard to be detected like residential areas, PKK/PYD camps, easily transformed factories as operational points.

The U.S. forces keep the construction of operational points hidden by declaring some areas as "prohibited area" in northern Syria, the reporters say.

The equipment in the military points includes artillery batteries with high maneuverability, multi-barrel rocket launchers, various mobile equipment for intelligence and armored vehicles such as "Stryker" for general patrols and security.

There are also three military points in Al-Hasakah, the latest of which was established in the northern district Tal Baydar.

According to the reporters, 100 U.S. Special Forces soldiers have been deployed to Tal Baydar to help PYD terrorists in their fight against another terrorist group, Daesh.

There are also foreign soldiers from the U.S.-led coalition stationed in the old farm district of Tal Tamir, which is located south of Resulayn near the Syrian-Turkish border.

There are also 150 U.S. Special Forces units in Ash Shaddadi district, south of Al-Hasakah, with a view to backing PKK/PYD during anti-Daesh operations.

The U.S. has established two operational posts in Manbij in 2016 when PKK/PYD captured the district.

One of these posts is located in Ayn Dadad town in the district, which can be used by U.S. Special Forces for patrols against the Free Syrian Army (FSA) units rescued during the Turkish Euphrates Shield Operation.

The other military unit is located in Usariye town, west of Ayn Dadad with the purpose of protecting PKK/PYD terrorists against FSA.

There are also three military posts in the northern province of Raqqah.

Around 200 U.S. soldiers and 75 French special forces units are also stationed in the PKK/PYD base in Ayn Issah town in northern Raqqa.

A military post in the town of Sirrin in Kobani is also used for airborne operations. PKK/PYD is supplied with military equipment and ammunition through this post.

This post also serves as a communication center of the anti-Daesh coalition and used for disrupting Daesh communications.

YPG terrorists, the armed wing of the PYD, is in control of Al-Hasakah in the east, northern Raqqah, Manbij, to the east of Aleppo, Afrin and Tal Rifaat districts.

Recognized by the U.S. as an "ally" in the fight against Daesh terrorist group, PKK/PYD militants run under the name of the Syria Democratic Forces (SDF) in the war-torn country.

Despite the fact that the militants were given SDF uniforms, some of them wear uniforms with banners of Abdullah Öcalan, jailed head of PKK terrorist group in Turkey.