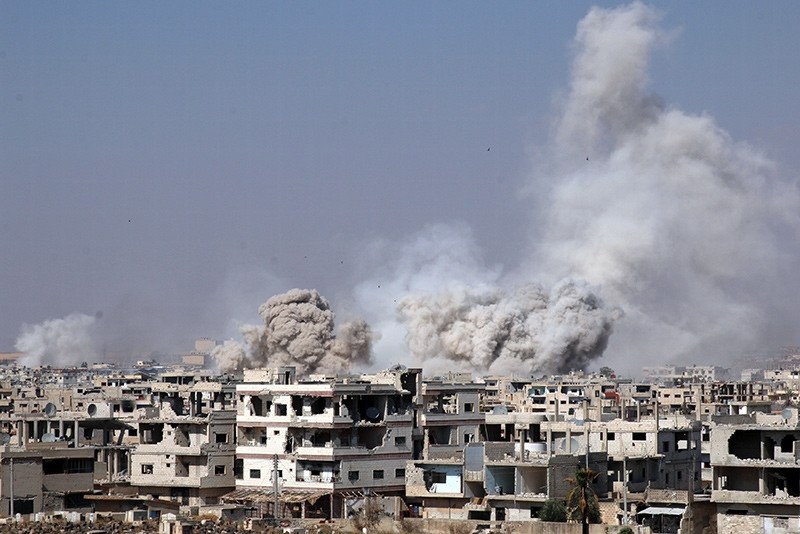 The Assad regime was responsible for dropping "no less than 244 barrel bombs" in conflict-free zones throughout the month of July, according to the most recent Syrian Network for Human Rights (SNHR) monthly report on Syria.

The report comes after Russia and the U.S. reached a ceasefıre agreement for southwestern Syria in early July.

The regime reportedly bombed southern portions of the country most heavily in July, dropping 142 barrel bombs on the city of Daraa, which is located within the established conflict-free zone.

The SNHR report emphasizes that the Assad regime has undoubtedly violated Article 7 of the Rome Statute through its systematic and widespread use of barrel bombs, constituting "crimes against humanity."

The use of barrel bombs, which the report describes as "distinctively indiscriminate weapons with huge destructive impact," has also been specifically condemned by the UN Security Council in Resolution 2139.

The regime prefers to use locally made barrel bombs over other weapons because of their low cost and ability to cause massive destruction. The bombs are mostly dropped in civilian areas, with the aim of "deliberately" causing the largest loss of human life, the report says. Depending on the amount of explosives within the bomb, they are able to destroy areas of 50-200 meters.

The report also stated that the percentage of women and children killed by barrel bombs in Syria ranges from 12 to 35 percent, adding that 4,476 barrel bombs were dropped by regime helicopters during the first seven months of 2017.

The SNHR urged the UN Security Council to place an arms embargo on the Assad regime, to prosecute those who supply the weapons, and to refer the case to the International Criminal Court, lest the council lose all its credibility and purpose.

Regime and opposition forces in the country have been involved in ongoing talks to broker ceasefire agreements in four areas of Syria.