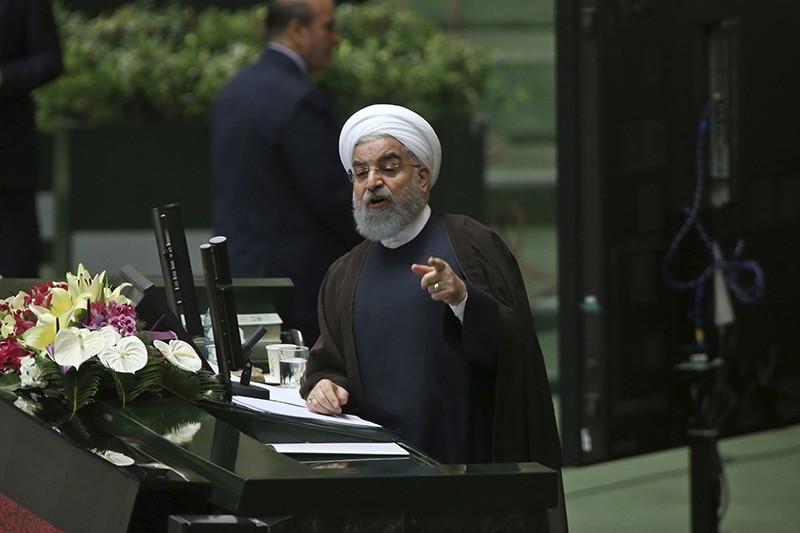 Iranian President Hassan Rouhani warned on Tuesday that Iran could abandon its 2015 nuclear deal with world powers within hours if the United States keeps on imposing new sanctions as he outlined plans for his new term.

In a speech to parliament, he also hit out at U.S. counterpart Donald Trump saying he had shown the world that Washington was "not a good partner."

Rouhani's comments come with the nuclear deal under mounting pressure after Tehran carried out missile tests and strikes, and Washington imposed new sanctions -- with each accusing the other of violating the spirit of the agreement.

Rouhani warned that Iran was ready to walk out of the deal, which saw the lifting of most international sanctions in return for curbs on its nuclear program, if Washington persisted.

"Those who try to return to the language of threats and sanctions are prisoners of their past delusions," he said in the televised address.

"If they want to go back to that experience, definitely in a short time -- not weeks or months, but in the scale of hours and days -- we will return to our previous situation very much stronger."

He said Iran did prefer to stick with the nuclear deal, which he called "a model of victory for peace and diplomacy over war and unilateralism" but that this was not the "only option."

Rouhani said Trump had shown he was an unreliable partner not just for Iran but for U.S. allies.

"In recent months, the world has witnessed that the U.S., in addition to its constant and repetitive breaking of its promises in the JCPOA (nuclear deal), has ignored several other global agreements and shown its allies that the U.S. is neither a good partner nor a reliable negotiating party," he said.

He highlighted Trump's decisions to withdraw from the Paris climate agreement and international trade deals.

U.S. State Department spokeswoman Heather Nauert refused to address Rouhani's comments directly, and insisted Washington was in full compliance with its side of the JCPOA.

But she confirmed the U.S. administration was reviewing its policy toward Iran and that it believes the nuclear deal did not put an end to Tehran's other "destabilizing activities" in its region.

Iran's parliament on Sunday approved more than half a billion dollars in funding for the country's missile program and foreign operations of the elite Revolutionary Guards in response to the new U.S. sanctions.

"Tehran welcomes the active presence of Russia's investors... in major infrastructure projects including in the fields of industry and energy," his office said.