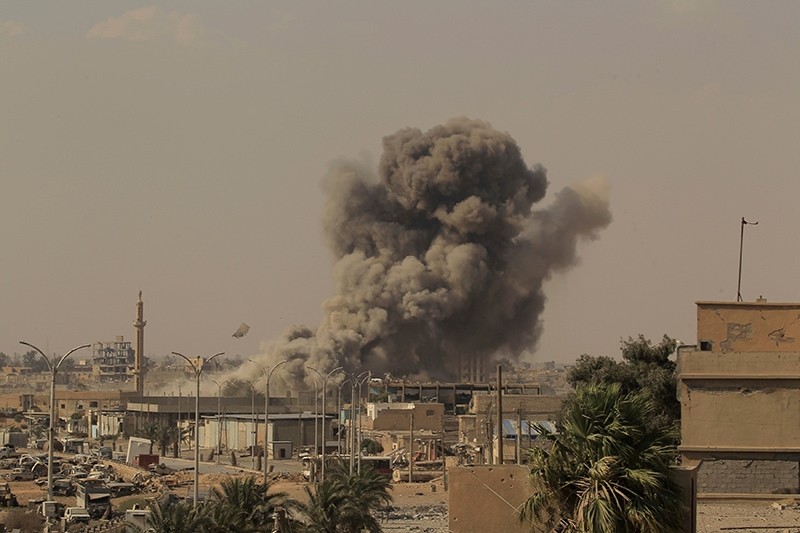 Smoke rises after an airstrike during fighting between U.S.-backed fighters and Daesh terrorists in Raqqa, Syria, August 15, 2017. (Reuters Photo)
by French Press Agency - AFP Aug 17, 2017 12:00 am
U.S.-led coalition airstrikes aimed at dislodging Daesh terrorist group from the Syrian city of Raqqa have cost the lives of 59 civilians in three days, a monitoring group said Thursday.

The Syrian Observatory for Human Rights said 21 children were among at least 59 civilians killed in the airstrikes since Monday, after more corpses were dug out from under piles of rubble.

With air support from the multinational coalition, U.S.-backed fighters battled the terrorists in Raqqa's Old City, of which it now controls 70 percent, the Britain-based group said.

The SDF also fought Daesh in the western district of Al-Dariya and the northwestern neighborhood of Al-Barid, as well as on the outskirts of the central district of Al-Murur, it said.

The coalition has repeatedly stressed it takes every precaution to avoid civilian casualties.

But it has recognized 624 such deaths in its air strikes since 2014, a figure which many rights groups say is vastly underestimated.

According to the United Nations, 25,000 civilians are trapped inside Raqqa, the terrorist group's erstwhile de facto Syrian capital.

The SDF launched an operation to capture Raqqa province from Daesh last year, and in June the alliance broke into Raqqa city for the first time.

It now holds more than half of the city, but the fighting has proved fierce and civilians have been killed both in the crossfire and while trying to flee.