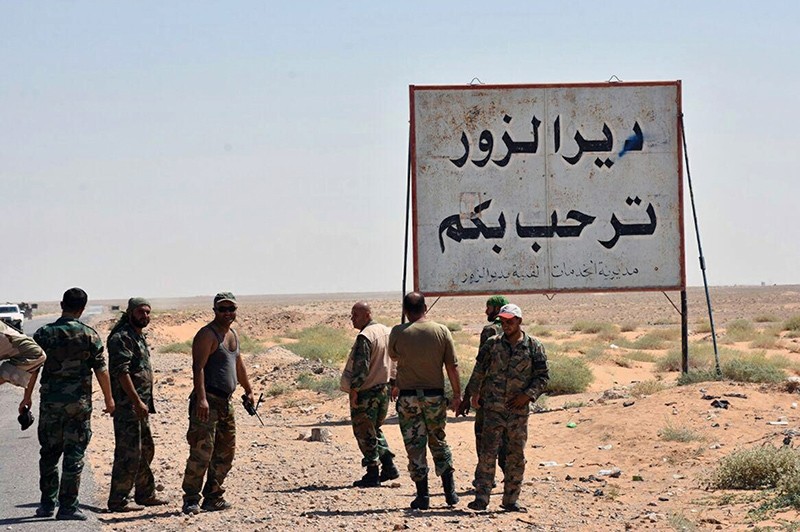 This photo released Sept. 3, 2017 by the Syrian official news agency SANA, shows Syrian troops and pro-regime gunmen standing next to a placard in Arabic which reads, ,Deir el-Zour welcomes you,, Deir el-Zour, Syria. (SANA via AP)
by Compiled from Wire Services Sep 05, 2017 12:00 am

The TV said troops advancing from the west reached the western outskirts of the city that has been contested since January 2015.

"The Syrian Arab Army has advanced on the Brigade 137 base front on the western side of Deir el-Zour city and broken the siege imposed by the Daesh organisation," Syrian state TV said, adding that Daesh defenses "have collapsed."

Breaking the siege on Deir el-Zour marks another victory for Assad regime, whose forces have been advancing on several fronts against Daesh and opposition groups over the past year.

Rami Abdurrahman who heads the Britain-based Syrian Observatory for Human Rights said advancing troops and those defending the city have met.

Thousands of people have been fleeing Deir el-Zour province because of the offensive, many of them heading toward the northeastern province of Hassakeh held by U.S-backed SDF, a coalition in which terrorist PKK's Syrian offshoot People's Protection Units (YPG) is the dominant force. Last week dozens of people trying to leave the region were killed or wounded by mines laid by the Daesh militants.

The city has been cut off since 2013, after rebel groups rose up against Assad during the first flush of Syria's six-year war. Daesh then overran opposition positions and surrounded the regime's enclave in the city in 2014.

It was a major prize. Deir el-Zour is the center of Syria's oil industry, a source of wealth to the group and a serious loss to Damascus. As the army has pushed east in recent months, oil and gas fields have once more fallen to the regime.

Daesh fighters have stepped up efforts this year to seize the enclave before the army could arrive. In January, they managed to sever it from the military airbase in the city and take over a nearby hill, further straining its links to the outside.

During the long siege, the city has been supplied via high-altitude air drops. The United Nations said in August it estimated there were 93,000 civilians in the regime's Deir el-Zour pocket, where conditions were "extremely difficult". The pre-war population of once one of Syria's most developed cities was 300,000.

The U.N. began air dropping aid into the city in April 2016, and it has staged dozens of deliveries of food and other humanitarian supplies.

But that route has also been fraught with difficulties, and the program was briefly suspended after the Daesh advance in January during which the terrorist group overran the aid dropzone.