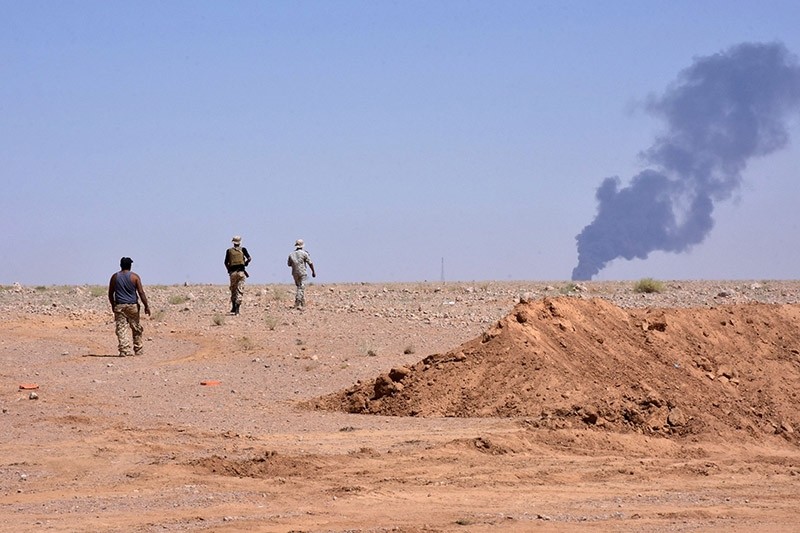 Smoke billows as Assad regime forces advance in Al-Shula on the southwestern outskirts of Deir el-Zour on September 8, 2017, during the ongoing battle against Daesh terrorists. (AFP Photo)
by Sep 09, 2017 12:00 am

The regime army and its allies recaptured an oilfield from Daesh near the eastern city of Deir el-Zour on Saturday in further advances against the militants, Assad regime TV reported.

Regime forces also seized part of a main highway running from Deir el-Zour down to the city of al-Mayadeen, to which many Daesh terrorists have retreated, the Syrian Observatory for Human Rights monitoring group said.

The regime army this week broke through Daesh lines to reach a government-held enclave of Deir el-Zour besieged for years by the terrorists, and is fighting to reach a nearby air base which Daesh still surrounds.

On Saturday, the army and militias fighting alongside it seized the Teym oilfield in desert south of Deir el-Zour, state TV said. Deir el-Zour is in an oil-rich area of Syria.

To the east of Teym and south of the air base, regime forces also recaptured part of the main road running from Deir el-Zour to al-Mayadeen, downstream along the Euphrates river and closer to the Iraq border, the Observatory reported.

The advances put yet more pressure on Daesh's shrinking territories, which once stretched across northern and eastern Syria, and northwestern Iraq.

In Syria, the group holds much of Deir el-Zour province and half the city, as well as a pocket of territory near Hama and Homs in the west of the country.