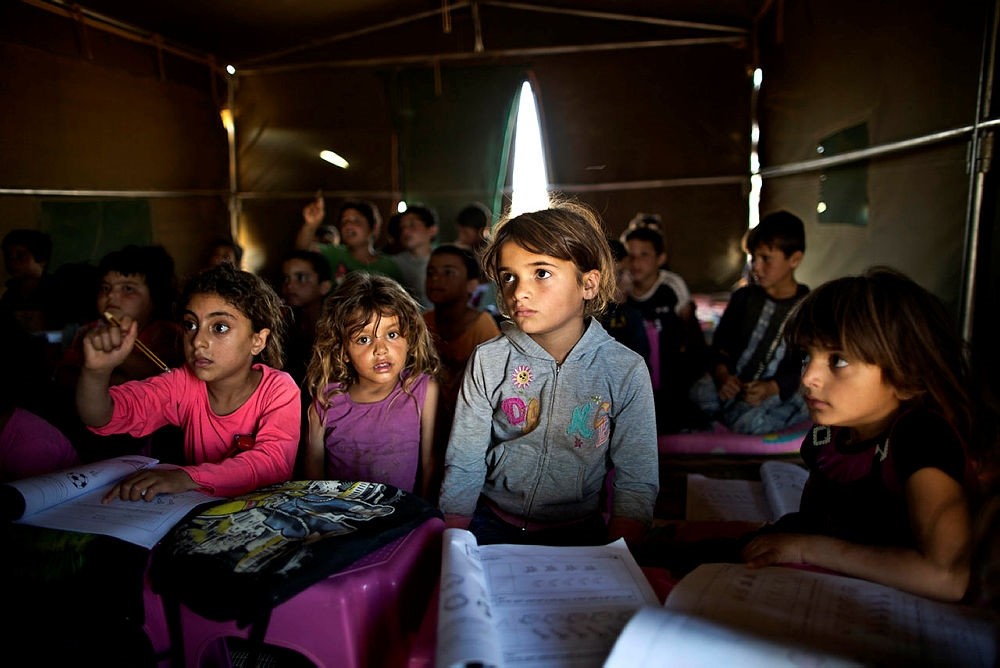 Syrian refugee children attend a class at a makeshift school set up in a tent at an informal tented settlement near the Syrian border on the outskirts of Mafraq, Jordan.(AP Photo)
by Associated Press Sep 14, 2017 12:00 am

Governments and aid agencies have been unable to account for millions of dollars in school aid for Syrian refugees, frustrating efforts to meet schooling needs for children in Lebanon, Jordan, and Turkey, Human Rights Watch said Thursday.

More than half a million school-age Syrian refugees in the three countries were out of school last year, in part because of severe funding gaps, the report by the New York-based group said. There are at least 1.6 million Syrian children refugees in the region.

In Lebanon, classes for Syrian refugee children are packed, and students attend school in half-day shifts in order to free up classroom space for enrollment. Even so, more than half the school-age Syrians in the country are not attending school, according to Lisa Abou Khaled, a communications officer for the U.N. refugee agency.

The challenges include pulling impoverished children away from work, finding money to pay for their transportation and supplies, and helping students feel safe and comfortable in schools.

The U.S. government aid agency USAID, for example, reported it had given $248 million in school aid to Jordan last year, but Jordan's government only reported receiving $13 million. A separate USAID database only tracked $82 million in disbursements that year.

Aid agencies in Lebanon are trying to fill a $25 million budget deficit to get students back in school this year, Abou Khaled said. Human Rights Watch said donor nations fell $97 million short of their pledges to provide $250 million for schooling in Lebanon in 2016.

Human Rights Watch researcher Simon Rau and one of the authors of the report said more transparency is needed to identify the funding gaps.

"Refugee hosting countries and donors have promised time and again that Syrian children will not become a lost generation," said Rau. "However, that's what's happening again."