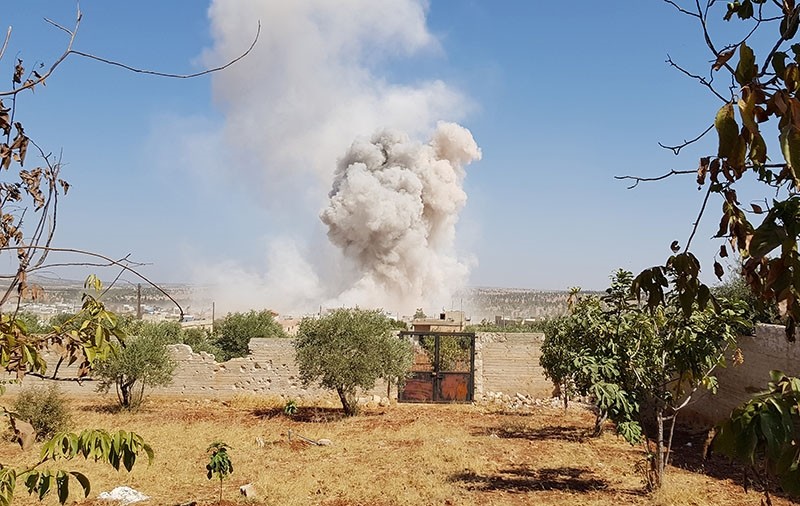 Insurgent groups launched a big attack on regime-held areas in northwestern Syria on Tuesday, the Syrian Observatory for Human Rights and a media outlet run by the Lebanese group Hezbollah reported.

The attack north of Hama city spearheaded by opposition groups marks the biggest offensive in that area since March, and underlines the complications facing Russian-led diplomatic efforts to preserve ceasefires in western Syria.

Several groups participated in the well-planned attack on government-held villages, the Observatory said, including Tahrir al-Sham -- an alliance of groups spearheaded by the former al-Qaida affiliate Nusra Front.

The Hezbollah-run military news outlet said the army and its allies were repelling what it described as a large-scale attack in the area by the Nusra Front and factions affiliated to it.

The Observatory said warplanes were carrying out air strikes in the area and fierce clashes were underway.

Turkey's official Anadolu Agency reported that at least 10 airstrikes were targeted in Khan Sheikhun, including the civil defense outpost and medical centers. The town was struck by the regime with chemical weapons on April 4, killing at least 90 civilians and prompting international outcry.

It was not immediately known which party have carried out the airstrikes.

AA reported that four civilians were killed and seven others were injured in regime airstrikes targeting villages in Kafr Nabl, south of Idlib.

The insurgents taking part in the assault included Chinese and Uighur fighters of the Turkistan Islamic Party and a group fighting under the banner of the Free Syrian Army, the Observatory said.

Insurgents advanced within a few kilometers (miles) of the regime-held city of Hama earlier this year, before the Syrian army and its allies retook the territory in April.

The northern Hama area is adjacent to the opposition-held province of Idlib, which is largely controlled by Nusra.

Ceasefires in western Syria -- for years the main theatre of the Syrian civil war -- have helped the regime army and its allies advance against Daesh in the east, where government forces are battling the group at Deir el-Zour.

Last week, Russia, Iran and Turkey agreed at talks in Kazakh capital Astana to post observers on the edge of "a de-escalation zone" in Idlib region.

The airstrikes in the region had largely stopped as the talks were advancing in Astana.

However, the Nusra Front denounced ceasefire talks in Kazakhstan, and vowed to keep fighting.