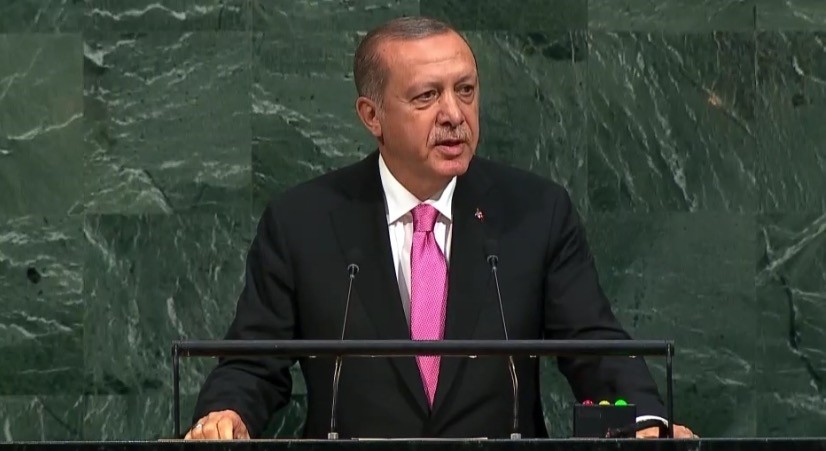 President Recep Tayyip Erdoğan said in a speech during the 72nd session of the United Nations General Assembly in New York that international collaboration was a must for finding a solution to the Syrian crisis.

"The international community has left Syria alone. The only way to find a solution to the crisis is to collaborate under this one roof," he said.

He also urged world powers to honor their promises to 3.2 million refugees in Turkey, after the country was named the most generous country for spending 0.75 percent of its gross national income (GNI) on humanitarian causes.

Turkey has the largest refugee population in the world and is currently home to more than 3 million Syrians, according to official data. It has spent around $25 billion to provide for those who have fled within its borders, while the international community contributed $526 million to that amount.

Reminding that Turkey has and will continue to do all it can to help Syrians, Erdoğan reminded world leaders of Turkey's determination in the fight against terror, saying it has liberated over 2.000 kilometer squares of land in Syria from Daesh terrorists.

He also criticized countries who continue to support terror groups such as the PYD/YPG, who claim to fight against Daesh, saying they are "solely trying to change the demographics of Syria."

The president also touched on the hotly-debated independence referendum proposed by the Kurdistan Regional Government in northern Iraq.

The Iraqi Supreme Court of Iraq on Monday ordered the suspension of the nonbinding referendum after the National Security Council rejected the move as "unconstitutional."

However, Iraq and Turkey are not alone in their outspoken opposition the vote.

The U.S. and other Western nations also fear that the Sept. 25 vote in Iraqi Kurdistan could ignite a new conflict with Baghdad and possibly neighboring countries, diverting attention away from the ongoing war against Daesh terrorists in Iraq and Syria.

In the wake of North Korea's nuclear tests and ballistic missile launches over Japan, Erdoğan asserted that Turkey was against nuclear armament.

"I want to reiterate once again that Turkey is against all kinds of nuclear weapons," he said.

Regarding the violence and oppression against Myanmar's Rohingya Muslim minority, he said "the international community has failed in the Rohingya crisis, just like it did in Syria."

He said the violence and crimes committed against the Rohingya will go down as a 'dark stain' in human history.

"These developments have proven right our call to restructure the United Nations Security Council, which we summarized as the 'World is bigger than 5,'" he added, mentioning his criticism about the structure of the UNSC, which only has five permanent members who basically decide the top governing body's policies.