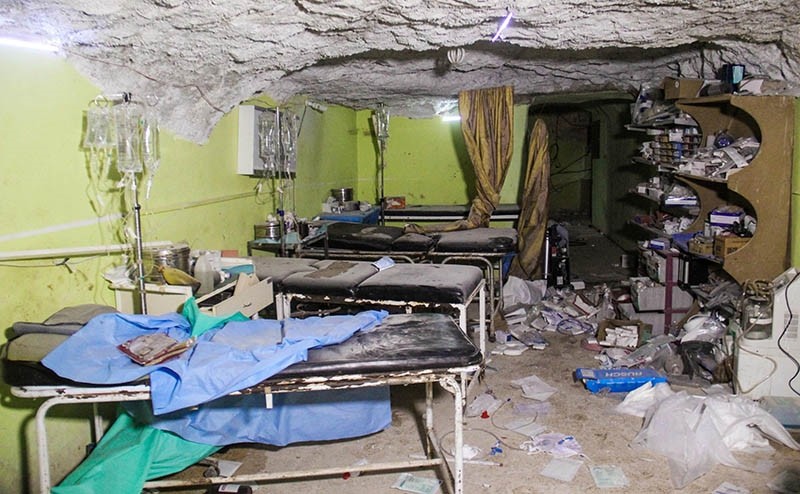 This file photograoh taken on April 4, 2017, shows destruction at a hospital room in Khan Sheikhun, a rebel-held town in the northwestern Syrian Idlib province, following a suspected toxic gas attack. (AFP Photo)
by Compiled from Wire Services Oct 05, 2017 12:00 am

Intensified fighting in Syria in recent weeks has damaged more hospitals, with at least 10 medical facilities hit over the past 10 days and hundreds of thousands of people cut off from health care, the International Committee of the Red Cross (ICRC) said on Thursday.

Civilian casualties in Syria have been mounting in the past two weeks, as fighting intensifies to the highest level since last year's battle for Aleppo, the Red Cross said.

"While recent months had provided some reasons to be hopeful, the return to violence is once again bringing intolerable levels of suffering to wide areas of the country," aid Marianne Gasser, head of ICRC's delegation in Syria.

ICRC said it's alarmed by reports of hundreds of civilian casualties and the destruction of hospitals and schools.

Fighting has been especially heavy in recent weeks in central, northern and eastern Syria between Russian-backed regime forces and rival insurgent groups. The violence is also taking place in de-escalation zones that are part of a deal reached in the Kazakh capital of Astana between Iran, Turkey and Russia.

With swelling numbers of civilians fleeing military operations, some camps around the northern province of Raqqa and in the eastern region of Deir el-Zour are receiving over 1,000 women, children and men every day, the statement said.

Meanwhile, Panos Moumtzis, the U.N. Regional Humanitarian Coordinator for the Syrian Crisis also warned Thursday of the high numbers of casualties from the recent escalation of violence in Syria.

"Hospitals, ambulances, schools and displaced people escaping violence have been targeted by direct air strikes resulting in deaths and injuries of innocent civilians," Moumtzis said in a statement.

September was described as the deadliest month of 2017 for civilians with daily reports of attacks on residential areas.

The statement said between September 19-30 airstrikes on residential areas in Idlib, in north-western Syria, have killed at least 149 people, the majority of whom were women and children.

It added that attacks on medical facilities "are depriving people in need of their right to life-saving medical care. Schools and hospital in Idlib have been forced to close due to fear of being targeted."

Syrian troops and the U.S.-backed Syrian Democratic Forces (SDF), which is predominantly led by the terrorist PKK's Syrian affiliate, the People's Protection Units (YPG), have been gaining ground from the Daesh terrorist group in both provinces over the past months. Their separate but simultaneous attacks have led thousands of people to flee Daesh-held areas that have come under intense airstrikes by Russian warplanes and those of the U.S.-led coalition.

On Wednesday, Assad regime forces kicked out Daesh fighters form the central province of Hama, ending a three-year presence of the extremists in the central region that has a religiously mixed population.

The Russian Defense Ministry, meanwhile, said its submarines fired 10 cruise missiles on Thursday at Daesh positions outside the eastern Syrian town of Mayadeen, one of the last major Daesh strongholds in the country.

Russia has been a key backer of Assad regime forces and has helped regime troops gain significant ground from opposition fighters and militant groups.

The ministry's spokesman Maj. Gen. Igor Konashenkov said in a statement the Kalibr missiles killed an unspecified number of Daesh fighters and destroyed major ammunition depots and command posts. The missiles were launched from the Veliky Novgorod and the Kolpino submarines in the Mediterranean Sea, Konashenkov said.

Syrian troops with the help of Russian air cover have been closing in on Mayadeen, which has become a main Daesh hub for militants and the group's leaders after its former strongholds of Raqqa and Deir el-Zour have come under attack.

Russia's military also said the leader of an al-Qaida-linked group in Syria who was reportedly wounded in a Russian airstrike this week had fallen into a coma. The military offered no evidence on the purported condition of Abu Mohammed al-Golani.

Russian jets bombed positions of the militant group, the Levant Liberation Committee, in the northwestern province of Idlib for two days and on Wednesday killed seven militant commanders and dozens of fighters at a militant-controlled air base, the Russian Defense Ministry said Thursday. At the time, the ministry quoted military intelligence as saying that al-Golani had been critically wounded.

However, the al-Qaida-linked group denied its leader had been wounded, saying he was in excellent health and carrying on his tasks as usual.