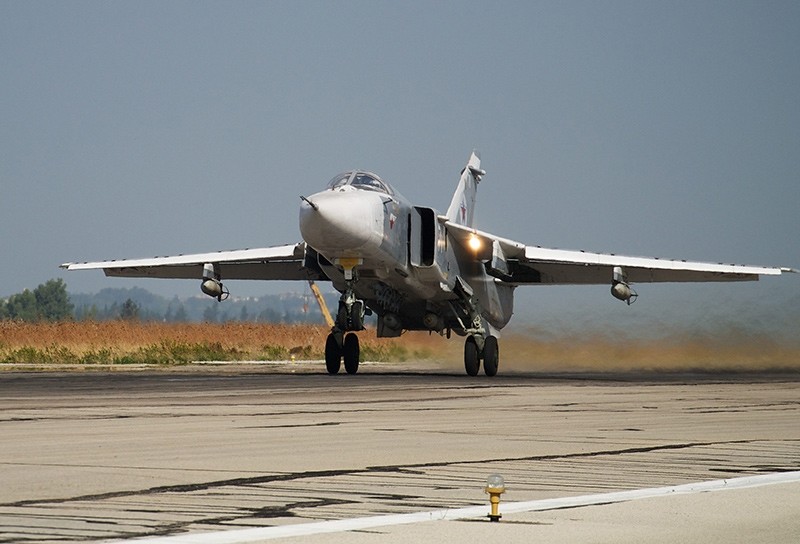 A Russian war plane takes off on a combat mission at Hemeimeem airbase, Syria, on Thursday, Oct. 22, 2015 (AP File Photo)
by Daily Sabah with Agencies Oct 10, 2017 12:00 am
A Russian SU-24 military plane crashed on take-off from Hmeymim Base in Syria, killing the crew, defense ministry sources said Tuesday.

"The Su-24 plane rolled off the runway and broke up while accelerating for takeoff... The plane's crew did not have time to eject and died," the source said.

He did not clarify how many people died, but the Su-24 usually has a crew of two.

"According to a report from the scene of the accident, the reason could be a technical failure," he added.

Russia has staged air strikes in Syria in support of the Assad regime since 2015.

On Tuesday, the defense ministry said Russian planes are currently carrying out 150 strikes per day in eastern Syria against Daesh terrorists.

The latest casualties put the toll of Russian servicemen officially reported killed in Syria at 37.

Last month a Russian general was killed near the eastern city of Deir el-Zour, where Russian special forces are participating in the regime's ground offensive.

In January, Russian President Vladimir Putin signed a law ratifying a deal with the Assad regime allowing Russia to keep its air base in the country for almost half a century.