Regime captures Mayadeen, leaving Daesh in control of only a single town in Syria 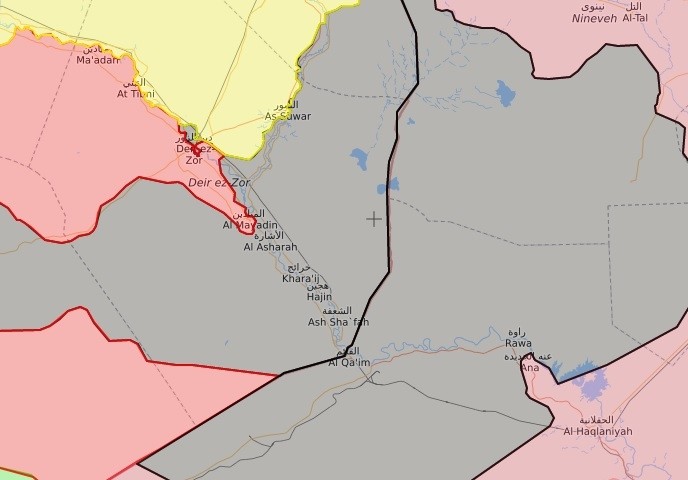 Assad regime forces and their allies on Saturday said they seized the Syrian town of Mayadeen, a Daesh stronghold in the country's east, in a major gain in the race for territories previously held by the militant group.

The announcement came as U.S.-backed Syrian Democratic Forces (SDF) said they were in the "final" battle for control of Raqqa, Daesh's de facto capital and the symbol of the group's reign of terror. However, officials with the SDF said it could be hours or days before Daesh is uprooted from the city, to the north of Mayadeen.

Over the past months, Mayadeen had become a refugee for the Daesh leadership from Syria and Iraq as its self-proclaimed caliphate crumbled.

The town, on the western bank of the Euphrates River, was also a major node in the race for control of the oil-rich eastern Deir el-Zour province that straddles the border with Iraq.

SDF has steadily been making a bid for areas in the province, securing territory to the east of the river as the U.S.-backed offensive focused on the Iraq border area, still controlled by Daesh.

Washington fears further advances by the regime forces could help Iran, which backs militias fighting alongside the Syrian military, expand its influence across the region by securing a land route extending from from Iraq, Syria and Lebanon, all the way to Israel.

As the Assad regime launched its Deir el-Zour offensive in September, the U.S.-backed forces diverted some fighters from Raqqa toward Deir el-Zour to secure the Iraqi border. This prompted the regime troops and allied militiamen to push south to Mayadeen, finally securing the town on Saturday.

The fall of Mayadeen would strangle Daesh militants in the city of Deir el-Zour, cutting their supply route from the south and the desert.

The pro-government Al-Ikhbariya TV quoted an unnamed Syrian military official as saying that Daesh defenses in Mayadeen collapsed on Saturday, with troops chasing last IS fighters out of town as corps of engineers cleared land mines.

Rami Abdurrahman, the head of the Syrian Observatory for Human Rights said regime troops, backed by Shiite militias, have control of the town but are still combing it for militants.

With Daesh under fire in Deir el-Zour and Raqqa, the only remaining urban stronghold still in the militants' hand is Boukamal, a strategic border town that had linked Daesh territory in Syria and Iraq.

Scores of civilians were seen in a video that surfaced Friday leaving Raqqa in desperate and terrified condition. They emerged from destroyed districts, some of them collapsing on the ground in exhaustion as they arrive to a SDF-held area of the city, in haunting scenes reflecting their years-old ordeal. Earlier this week, U.S. officials said an estimated 4,000 civilians are believed still trapped in the city.

Omar Alloush, a local Raqqa official, told The Associated Press on Friday that about 100 Daesh militants surrendered at once.

The U.S.-led coalition fighting the Islamic State group said Saturday a deal negotiated by local officials and tribesmen has been reached in Syria's Raqqa to evacuate civilians and local Daesh fighters but not foreign militants.

Alloush confirmed the deal Saturday saying local fighters have been included in the evacuation. He didn't immediately comment on the number of evacuees. The deal was negotiated by the Raqqa Civilian Council and tribal leaders.

In a statement Saturday, the coalition said it is not involved in the talks but "believes that it will save lives" and allow the SDF and the Coalition to focus on defeating Daesh in Raqqa with less risk to civilians.

The deal reached on Thursday allows the SDF to screen and search all those leaving the area. The coalition said a convoy of vehicles is to leave Raqqa later Saturday.

Losing Raqqa, in many ways the symbol of Daesh's so-called caliphate, would be yet another blow to the militant group and its reign of terror in the region as its strongholds crumble one after another in Iraq and other parts of Syria.

Militants seized Raqqa in 2014, the first city to fall under the full control of the terrorist group. It became synonymous with Daesh's reign of terror, with public killings and beheadings — videotaped slayings that have shocked the world. It was also from Raqqa, which became a destination for foreign fighters from around the world, that many of Daesh attacks in the West were plotted.

The latest battle for Raqqa began in June, with heavy street-by-street fighting amid intense U.S.-led coalition airstrikes and shelling. The battle has dragged on in the face of stiff resistance from the militants and civilians trapped in the city.

On Saturday, the SDF said they seized the al-Nahda neighborhood in Raqqa's western sector. A day earlier, Daesh carried out an offensive on SDF forces near the city's main hospital, a Daesh fortified headquarters.